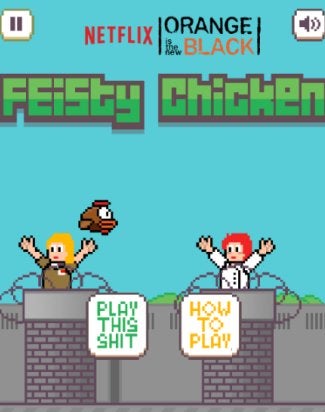 If you decide you need to take a break while binge-watching the new season of “Orange Is the New Black,” streaming now on Netflix, the company has the perfect escape. Inspired by the “Flappy Bird” game phenomenon, Netflix has developed a game called “Feisty Chicken.”

In it, players take on the role of the infamous chicken that eluded capture through the first season of the hit show. The description given to the titular heroine in the game is, “She flew the coop a long time ago, but she’s always on the run. Living off the land, living off her wits and hunted by the women of Litchfield.”

Gameplay is similar to “Flappy Bird,” with players guiding the chicken through barbed wire and other obstacles by clicking the mouse button or hitting the space bar. But don’t get too lost in this world. There are 13 new episodes of “OITNB” to get through before you friends start talking about it.