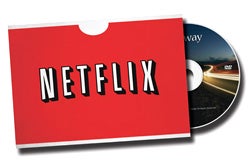 “I’m your worst fear.” That’s what Reed Hastings, founder and CEO of Netflix, told a group of magazine executives in New York on Wednesday, when he was asked which magazines he has subscriptions to. “I read them online. I love the content. And I don’t pay for it.”

Hastings was in town for a keynote conversation with BusinessWeek executive editor John Byrne at the Magazine Innovation Summit.

Compared to most magazine companies, Hasting admitted Netflix is in an enviable position. “The fortunate thing for us is video stores are closing, meaning more people are renting online,” Hastings said, pointing out that unlike, say, BusinessWeek, its competitors on the DVD side of the business are few and "fixed": Blockbuster and Redbox. But on the streaming video side, he said, the market is fast becoming “wildly competitive.”

Streaming video to customers is attractive because it sidesteps a huge cost for Netflix: the post office. Hastings said that Netflix will spend $600 million on postage next year – making the U.S. Postal Service its biggest vendor, “larger than any one studio,” he said. (Streaming would also circumvent the Postal Service’s threat to cut its delivery schedule from six days a week to five.)

Hastings said that a growing rivalry between employees who work on the DVD side of the business versus those on the streaming video side is causing at least some “internal tension” at Netflix – not unlike the tension between print and online staffs within some newspaper newsrooms.

(All of this, by the way, from a guy who got the idea for Netflix after he was smacked with $40 late charge for Apollo 13.)

Hastings also noted how tough it was for him to get funding in the beginning. In the late ’90s, potential investors would argue with him that the DVD business was coming to an end. (“They’re going to be beaming movies to your watch in 2000.”)

Later, I asked Hastings if a Netflix for magazines could work. His response: “I don’t know. It’s worth a shot.”