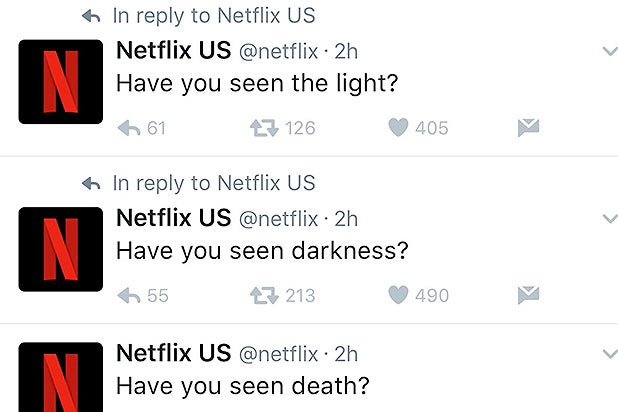 Netflix tried to play it mysterious when the streaming giant teased its new series “The OA,” but gave followers perhaps a bit too much creepiness for a Monday morning.

The tweets led up to the premiere date and trailer reveal for the platform’s new series “The OA,” starring Brit Marling as a young woman who returns after a seven-year disappearance with a seemingly miraculous restoration of her sight.

Some fans were outraged immediately.

“This is a very triggering thing to tweet to your 2mil+ followers,” tweeted one such Twitter follower in response to the teaser videos.

“If this is a promo stunt, it’s bad and you should feel bad. If this is a hacker, thanks for threading your tweets. #cleanliness,” said another.

But others made a joke of the whole thing.

“Is this the trailer for Fuller House Season 2? Taking a dark turn aren’t we?” asked one joker.

Below is a sampling of responses. “The OA” premieres its eight episodes on Friday.

.@netflix this is a very triggering thing to tweet to your 2mil+ followers

.@netflix If this is a promo stunt, it's bad and you should feel bad. If this is a hacker, thanks for threading your tweets. #cleanliness

@netflix keep tweeting this shit and imma switch to Hulu

@netflix Yes, but it was quick and merciful. pic.twitter.com/fLR8M0N5bG

@netflix Have you seen Trump's taxes?

@netflix have you seen bad advertising?

.@netflix he sucks at Twister pic.twitter.com/zTdEhtzxR4

@netflix Yes. This is what it looks like: pic.twitter.com/NA98QUFBoG