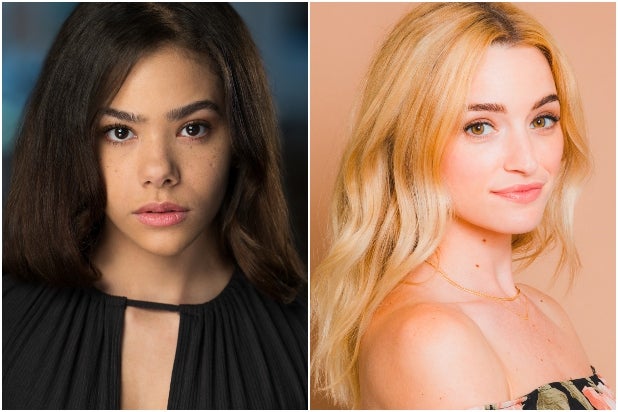 Netflix has given a 10-episode order to coming of age series “Ginny & Georgia” starring Brianne Howey of “The Passage” and newcomer Antonia Gentry.

According to Netflix, “Ginny & Georgia” follows angsty and awkward fifteen-year-old Ginny Miller (Gentry), who often feels more mature than her thirty-year-old mother, the irresistible and dynamic Georgia Miller (Howey). After years on the run, Georgia desperately wants to put down roots in picturesque New England and give her family something they’ve never had… a normal life. For Ginny, that means navigating a prestigious school, rising popularity, and complicated love interests. But it’s not all carpool and Kombucha as Georgia’s past threatens her and her family’s new way of life.

“Ginny & Georgia” is currently in production in Toronto, Canada, and is expected to launch in 2020. Adams and Fisher will executive produce along with Jeff Tahler for Madica Productions, Jenny Daly for Critical Content, Holly Hines, and Daniel March for Dynamic Television. Elena Blekhter will co-executive produce.

Lampert wrote the script while working as the manager of development at Madica Productions, a sister company of Sunshine Sachs. Together, Tahler and Lampert spent a year developing the project, at which point Madica brought it to Critical Content as part of their first look deal with them.

Below are Netflix’s official character descriptions:

Howey will play “Georgia.” Georgia is shrewd, smart manipulative and steely under her charm. She escaped poverty and had her first child, Ginny, at age 15. A firm believer in retribution, Georgia is a survivor, no matter what life throws at her.

Gentry will play “Ginny.” Ginny is a very smart, rebellious, and vulnerable teenager beneath an armor of outspokenness and quick wit. Ginny is the bi-racial daughter of Georgia and not quite sure what to make of their new home in an upscale Massachusetts town.

Diesel La Torraca will play “Austin.” Austin is Ginny’s sweet, innocent, perpetually unkempt younger son. He is desperate to hold on to the promise of their new life in Massachusetts.

Jennifer Robertson will play “Ellen.” Ellen is a working mom and more grounded than her preppy upscale neighbors. She is the mother of 15-year-old twins Maxine and Marcus, says what she thinks, and lives across the street from new neighbors Georgia and her two children.

Felix Mallard will play “Marcus.” Marcus is the edgy, bad boy across the street you shouldn’t have a crush on but do. Maxine’s twin brother, he is intrigued with his new neighbor Ginny.

Sara Waisglass will play “Maxine.” Maxine is cool, popular, smart, quirky, confident, and has a huge crush on Georgia. She is impressed with new girl Ginny and immediately befriends her.

Scott Porter will play “Mayor Paul Randolph.” Some would call him a young JFK. As Mayor of Wellsbury, Massachusetts, Paul is focused, driven, and recognizes a formidable force in Georgia.

Raymond Ablack will play “Joe.” Joe is granola in a manly way, not a man bun way. He owns the local farm to table restaurant, Blue Farm Cafe. And can’t help but notice when Georgia moves to town.