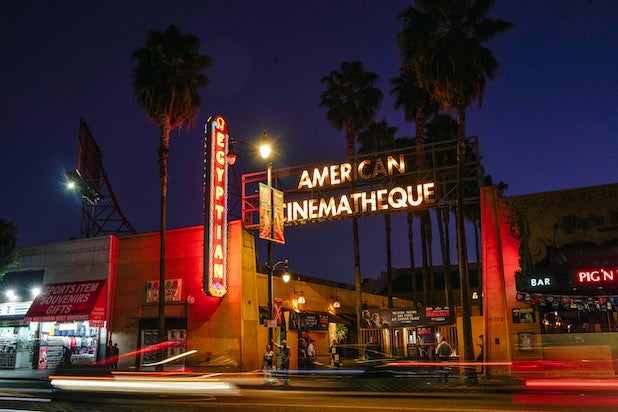 Netflix and the American Cinematheque are partnering on a deal to invest in the restoration of the historic, century-old Egyptian Theatre on Hollywood Boulevard, the two groups announced Friday.

TheWrap reported in April 2019 that Netflix was in early talks to buy the Egyptian Theatre from American Cinematheque, and the deal has now closed, though it was reported at the time the deal is part of an effort to restore the cinema and not expand to brick and mortar theater operations.

Netflix will invest in the theater’s renovation and will use the space for events, screenings and premieres during the week, while the non-profit film organization American Cinematheque will continue to curate its movie program on the weekends. The announcement says that the partnership will allow American Cinematheque to expand the scope of its event programming, festivals and educational outreach.

“The Egyptian Theatre is an incredible part of Hollywood history and has been treasured by the Los Angeles film community for nearly a century,” Scott Stuber, head of Netflix Films, said in a statement. “We’re honored to partner with the American Cinematheque to preserve the theater’s storied legacy and continue providing remarkable film experiences for audiences. We look forward to expanding programming at the theater in ways that will benefit both cinema lovers and the community.”

“The American Cinematheque was honored to bring the Egyptian back to life in 1998, and together with Netflix we are thrilled to continue this stewardship by restoring it once again for a new generation of film fans to experience movies on the big screen,” chairman of the American Cinematheque, Rick Nicita, said in a statement. “The Egyptian Theatre remains our Hollywood home and we are grateful to both the City of Los Angeles and the Attorney General of the State of California as we accept this incredible opportunity that will greatly benefit the American Cinematheque.”

“Love for film is inseparable from L.A.’s history and identity,” mayor Eric Garcetti said in a statement. “We are working toward the day when audiences can return to theaters — and this extraordinary partnership will preserve an important piece of our cultural heritage that can be shared for years to come.”

Also Read: Adam Sandler Nearly Got Choked Out During the Filming of 'Uncut Gems'

“The Netflix and American Cinematheque partnership at the Egyptian Theater is a win-win for film, historic preservation, and the arts,” councilmember Mitch O’Farrell, Los Angeles City Council 13th District, said in a statement. “The collaboration ensures the cultural destination remains in the Heart of Hollywood for decades to come.”

The Egyptian Theatre is a classic and esteemed movie palace originally built in 1922 during the silent film era. A fixture in Hollywood’s Golden Age, the Egyptian was the site of the first Hollywood movie premiere, of “Robin Hood,” starring Douglas Fairbanks. At the premiere, Fairbanks was joined by Cecil B. DeMille, Charlie Chaplin, Jesse L. Lasky, and Mary Pickford. Other notable silent-era premieres held at the Egyptian include DeMille’s “The Ten Commandments,” Chaplin’s “The Gold Rush” and “Don Juan” (1926) starring John Barrymore and Mary Astor.

American Cinematheque, established in 1984, will continue to operate the Aero in Santa Monica. The city of Los Angeles sold the Egyptian Theatre to the Cinematheque in 1996 and then raised funds to renovate and restore it. It was then restored again in 2016 with the support of the Hollywood Foreign Press Association, Turner Classic Movies and The Film Foundation to update the projection booth for 35mm nitrate film, making it one of only four theaters in the U.S. capable of showing the rare, ultra fragile and flammable film stock.

Part of the new plans for restoration include upgrading equipment to enhance the audience experience and renovating and restoring the theater.

Netflix had previously formed a similar partnership to save New York’s historic Paris Theatre from closing its doors.