It’s officially Netflix vs. traditional TV — and Netflix is about to take the lead.

A new report from PricewaterhouseCoopers highlights the decline of traditional cable television, along with the increasing rise of streaming; of the 2,000 people surveyed by PWC, 73 percent said they pay for traditional pay TV — a 3 percent drop from 2016 — which matches the percentage of respondents who said they subscribe to Netflix. (That sound you heard was Netflix CEO Reed Hastings cackling on his way to the ATM machine.)

Netflix added another 850,000 domestic subscribers during its last quarter, and saw its total U.S. customer base swell to more than 50 million in 2017. Coupled with its international subs, the home of “Stranger Things” and “The Crown,” among other original shows, has about 110 million accounts across the globe.

Also Read: Netflix in January: What's Coming and What to Watch Before It's Gone (Photos)

And streaming isn’t just for cool young people, either. The PWC report called it a “streaming explosion for all ages,” with 63 percent of respondents between 50-59 saying they access TV on the internet — a 15 percent jump from 2016. On the other end of the spectrum, 87 percent of respondents 18-24, and 90 percent between 25-34 said they stream their shows. 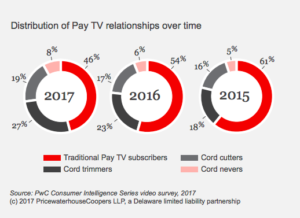 Also Read: 'Dark' Showrunners Answer Our Nagging Questions About Season 1 and Tease Their Plans for Season 2

There is one sign customers are hitting a saturation point with streaming, however. The use of several streaming platforms had many respondents overwhelmed, with “just a quarter of consumers say they can handle using more than four services in addition to Pay TV.”