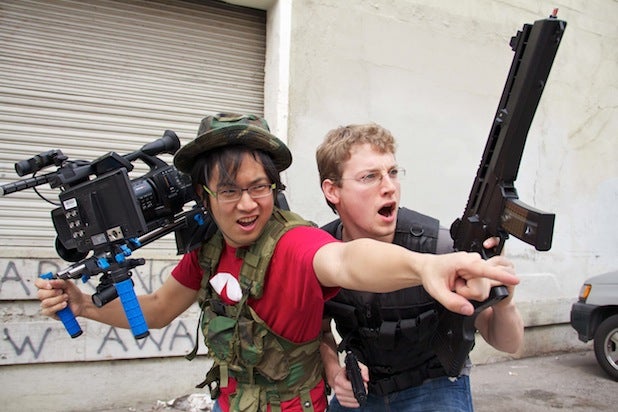 Netflix has acquired streaming rights to the second season of Freddie Wong’s “Video Game High School,” according to two individuals with knowledge of the deal.

The streaming giant holds exclusive rights in the specialty video-on-demand window within the United States and all the foreign territories where the the service is available.

The latest season of “Video Game High School” debuted on the service on Thanksgiving, four months after it first aired on YouTube. The second season of the show, which Wong and Arnold released in TV-length episodes, debuted on YouTube and Wong’s own site RocketJump this summer. It has racked up more than 30 million views.

Wong released one episode a week, and Netflix gained the exclusive rights after all six episodes aired on YouTube.

The first season of the show was one of the most popular web series last year, and the two season combined have garnered more than 60 million views. Wong, Matthew Arnold and Brandon Laatsch shot it as movie, but released it online in nine installments. For the purposes of Netflix, it was split into five TV-length episodes.

The show will still be available on YouTube in the United States, but digital services such as Amazon or Hulu cannot acquire it. The Collective, which manages Wong and helps with both production and distribution, can still sell the show to TV networks overseas and along other ancillary channels — a major source of revenue for such series. However, sources cautioned some networks may be wary since they can’t acquire SVOD rights.

A deal between Netflix and Wong unites a distributor and a creator who pride themselves on flouting Hollywood’s standard operating procedures.

Netflix has aggressively courted creators disenchanted with working for major studios or those with audiences considered too niche. It has offered those filmmakers and writers complete creative freedom, released their episodes online all at once and insulated them from pressure over ratings.

Wong has resisted numerous overtures from Hollywood out of a desire to control his own intellectual property, employing alternative financing (crowdfunding) and distribution (his own site).

Fans contributed $273,725 to support production of the first season of “Video Game High School” on Kickstarter, and Wong returned to the site for help funding season two. He set what was then a record for the crowdfunding platform, netting $808,341.

The show appeals to a very specific demographic — avid video game players, as “VGHS” is set a world in which video gamers are the nation’s most popular athletes. Yet it stands as one of the biggest successes in the still nascent online video industry.

The second season cost $1.2 million in total, and demonstrates an agility with special effects that renewed movies studios’ interest in Wong as a potential film director.