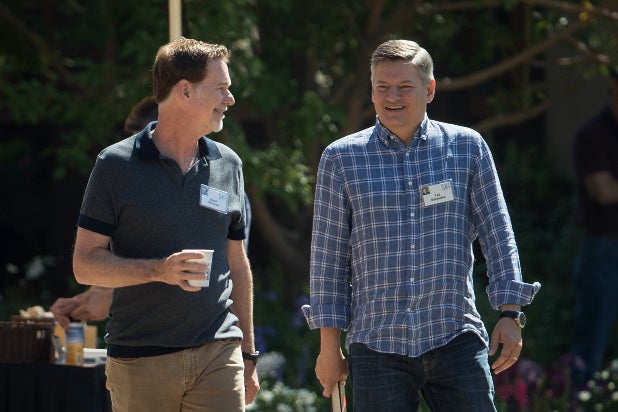 Netflix executives Reed Hastings and Ted Sarandos both made millions more in 2019 than they did in 2018.

Hastings, the streaming giant’s founder, CEO, president and chairman of the board, tallied $38.6 million in 2019, according to an SEC filing — a $2.5 million increase from the previous year. Chief Content Officer Sarandos saw a $5.1 million bump to $34.7 million.

While Hastings has *only* paid himself $700,000 in salary over the past two years, Sarandos’ salary soared from $12 million annually to $18 million year over year. Considering the stock is trading well over $400 per share these days, we’d say he’s earned it.

Sarandos’ option awards were valued at $16.6 million for 2019, which is about $1 million less than 2018. Under that all other compensation catch-all title, Sarandos tacked on an additional $66,000 north of last year’s mostly nonmaterial take. Chump change, we know.

The salaries for top executives at publicly traded companies are reported in advance to the Securities and Exchange Commission. The SEC also gets a filing of the C-suite’s stock option allowances, though the details come out within a window following the conclusion of a corporation’s fiscal year.

Netflix reported its Q1 2020 earnings on Tuesday. The company added a record 15.8 million subscribers in the quarter. That number was way higher than what media analysts expected to see, and it all adds up to a hell of a lot of “Tiger King” viewers.