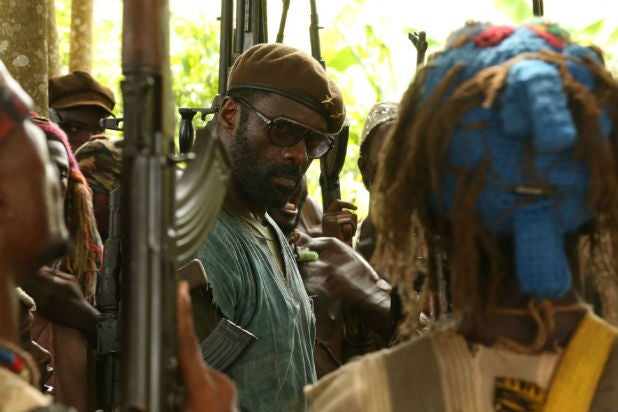 Netflix announced the rollout of its film initiative on Tuesday, presenting a slate that includes the film “Beasts of No Nation,” which stars Idris Elba and is directed by Cary Fukunaga.

Set for a worldwide premiere Oct. 16 on Netflix as well as a theatrical release that same day, “Beasts of No Nation” is based on the novel by Nigerian author Uzodinma Iweala. It tells the the story of Agu (newcomer Abraham Attah), a child soldier torn from his family to fight in the civil war of an African country. Elba portrays Commandant, a warlord who takes in Agu and instructs him in the ways of war.

Bleecker Street is distributing the film with Netflix.

“The Ridiculous Six,” the first of four Adam Sandler films that will be released exclusively on Netflix, will premiere Dec. 11. The film, which stars Sandler, Terry Crews, Jorge Garcia and Taylor Lautner, among others, is billed as a comedic western ensemble movie.

Also on the slate: “Pee-wee’s Big Holiday,” which will premiere on Netflix in March 2016. The film, a collaboration between Paul “Pee-wee Herman” Reubens and Judd Apatow, finds Herman being inspired to take his first-ever holiday after meeting a mysterious stranger.

Meanwhile, “Crouching Tiger, Hidden Dragon: The Green Legend” will be released theatrically and on IMAX in China, as well as globally via Netflix, in the first quarter of 2016. Based on the Wang Dulu novel “Iron Knight, Silver Vase,” the new offering echoes the themes of the original 2000 film but tells its own story, which revolves around “lost love, young love, a legendary sword and one last opportunity at redemption” and is “set against breathtaking action in an epic martial arts battle between good and evil that will decide the fate of the Martial World,” according to Netflix. Directed by Yuen Woo-Ping (“Tai Chi Master”), the film stars Michelle Yeoh, Donnie Yen, Harry Shum Jr., Jason Scott Lee, Eugenia Yuan, and newcomer Natasha Liu Bordizzo.