Netflix is celebrating Pride Month, revealing its greenlit “Stand Out: The Documentary.”

The documentary film will examine the history of LGBTQ+ stand-up comedy. While exact details of who will be featured in the doc were not available, Netflix did note that many of the comedians in “Stand Out: An LGBTQ+ Celebration” are in both projects. 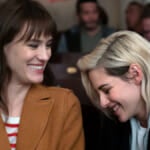 The feature-length documentary will include original performances, interviews, archival materials and backstage vérité-style footage. It will explore themes including comedy as activism, diversity in stand-up, new queer culture and mainstreaming the alternative.