Netflix is bringing out its stable of comedians for the first ever Netflix Is a Joke Festival, which will be held in Los Angeles from April 27 – May 3. Among the comedians that will appear are Ali Wong, Amy Schumer, Bill Burr, Dave Chappelle, David Letterman, Jamie Foxx, Jane Fonda and Lily Tomlin, Kevin Hart and Martin Lawrence.

“It’s our honor to transform LA for one week into the funniest place on earth,” Netflix chief content officer Ted Sarandos said. “This festival is a unique celebration of the art of comedy, and the role it plays in reflecting our lives and defining culture. It’s a chance for comedy lovers to come together and see their favorite artists as well as discover new ones, and for us to be able to share the electricity and excitement of the festival in Los Angeles with Netflix members around the world.”

Also Read: Netflix in March: Here's Everything Coming and Going

Headlining the event will be a stand-up performance by Chappelle at the Hollywood Bowl and “Stand Out,” a showcase of LGBTQ+ comedians at the Greek Theatre led by Wanda Sykes, Rosie O’Donnell and Margaret Cho. Letterman will host “That’s My Time,” a showcase of upcoming comedians that will also feature interviews between the guests and the former “Late Show” host.

The festival will conclude with “The Hall,” a special event at the Ace Hotel honoring late comedy legends like George Carlin, Joan Rivers, Richard Pryor and Robin Williams. Marty Callner will direct and executive produce through his Funny Business, Inc. shingle. Callner created “The Hall” with Randall Gladstein, who will also executive produce with producer/manager, David Steinberg.

Presales will begin Tuesday with tickets open to the general public on Friday, March 6. All the aforementioned events along with several others will be recorded for release on Netflix later this year.

Check out the video promo and poster art below: 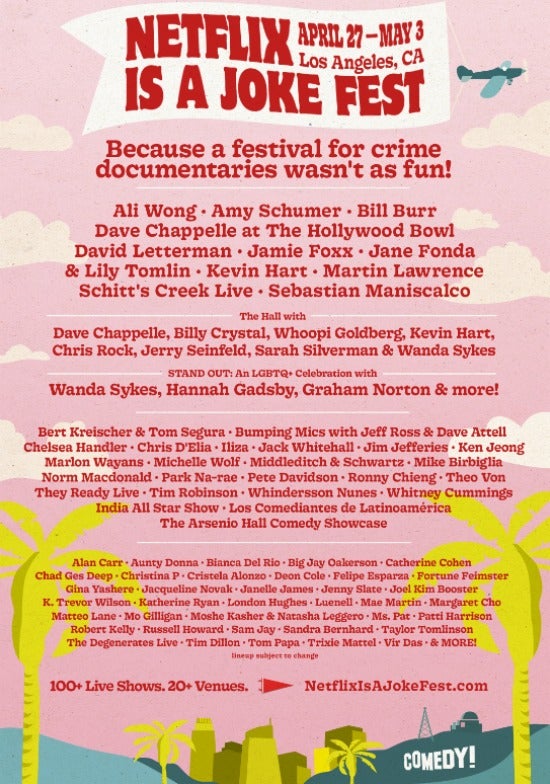