Netflix shares were down 13 percent as markets opened, but started to rally a bit an hour into trading, hitting $366.22 a share — down about 8.5 percent from its previous close. 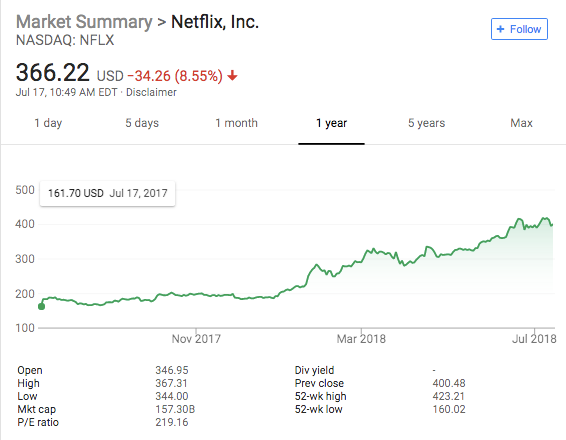 Wall Street is reacting to the Los Gatos, California-based company reporting it added 5.2 million subscribers during the second quarter, coming in about 1 million subscribers short of Netflix’s own estimates. Netflix also shared lower guidance for third quarter subscriber growth than expected, with the company aiming for 5 million new customers, while analysts had projected about 6 million.

Netflix narrowly missed on analyst estimates on revenue, bringing in $3.9 billion for the quarter, but beat expectations with earnings of 85 cents per share.

Even with Tuesday’s dip, the streaming heavyweight has had a strong 2018, with shares up 90 percent since the start of the year. Last week, Netflix, spearheaded by “The Crown” and “Stranger Things,” broke HBO’s 17-year streak of being the most nominated network for the Emmy Awards.