As a probable result, shares for the streaming giant have already dropped more than $3 apiece within the first 25 minutes of Tuesday trading.

“We lower our rating and 2H16 & FY17 NFLX estimates as we worry that Brexit adds fundamental risk that decelerating UK and EU GDP growth over the next 12-24 months will accelerate NFLX subscriber churn (cancelable at any time) or slow sub growth,” analyst Laura Martin said. “These heightened fundamental risks suggest valuation multiple contraction, in addition to negative currency translation risks beginning immediately. We note that content fees are typically at fixed rates over multi-year contracts and typically not based on subscriber levels.”

“Separately, in May, the EU proposed legal changes that would force NFLX to fund European-made films, implying higher costs and lower ROICs as local content often does not travel well globally,” she continued. “If NFLX chooses to exit certain EU markets to avoid these requirements, this would slow international subscriber growth.”

Below is a snapshot of NFLX trading thus far this morning. As of 9:55 a.m. ET, shares had sunk 3.3 percent. 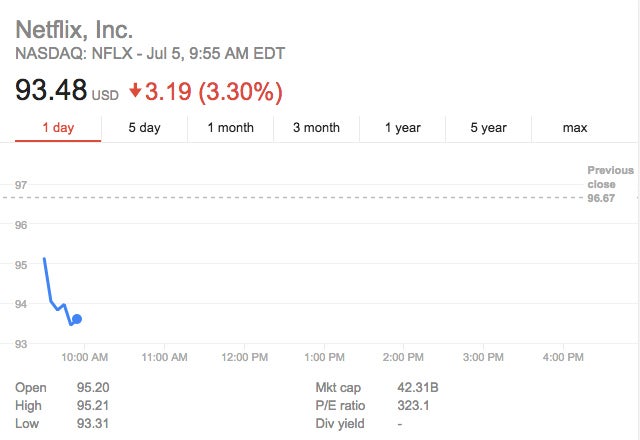