Netflix reported some good financial news today, which turned out to be great news for anyone who owns NFLX shares.

That’s because the stock’s trading price just jumped $20 — or 20.2 percent — per share, thanks to a strong third-quarter in both earnings and subscriber growth.

The home to “Orange Is the New Black” and summer phenom “Stranger Things” added 3.57 million members from the end of June to the end of September. That’s roughly in line with what it had done in 2015 (3.62 million), and much better than the company fared in 2016’s Q2.

Last quarter was a big disappointment for the streaming giant, subscriber-wise. That time, the growth in subs fell 32 percent shy of expectations: Netflix had added just 1.68 million new members in the June 2016-ended quarter, finishing with 83.18 million members.

Here is the sudden leap in the stock’s trading after news of the impressive performance broke. 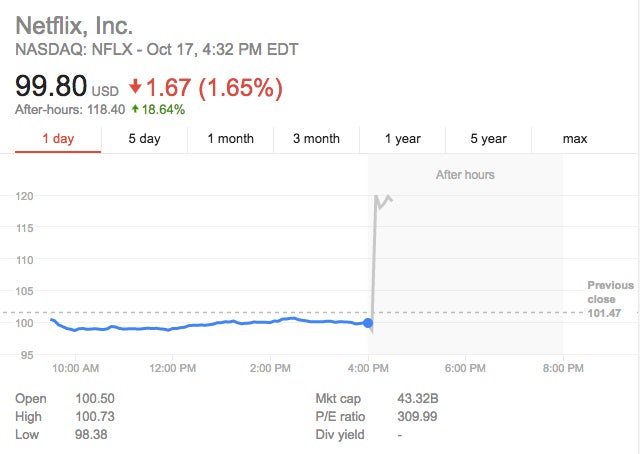 'Luke Cage' Main Characters: Everything You Need to Know (Photos)

TheWrap breaks down the major players in the new Marvel/Netflix series that premiere on Sept. 30

Cage was blessed with unbreakable skin and super strength due to a prison experiment that went awry. As the show begins, he is hiding out in Harlem after the events of "Jessica Jones." He tries to keep a low profile, but cannot sit idly by as the community is torn apart by crime.