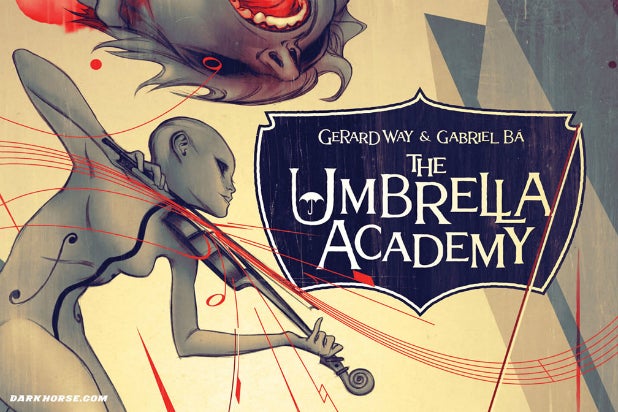 Netflix has picked up the cult graphic novel series “The Umbrella Academy” to a 10-episode series, the streaming service announced Tuesday.

The graphic novels, created by Gerard Way of My Chemical Romance fame and illustrated by Gabriel Bá, follow the estranged members of a family of superheroes — the titular Umbrella Academy — as they work to solve their father’s mysterious death. The crew includes colorful characters including Spaceboy, The Kraken, The Rumor, The Séance, Number Five, The Horror, and The White Violin.

In the world, superpowered infants are born to seemingly unconnected mothers and are adopted by a man called The Monocle, who is in fact an extraterrestrial.

It’s similar in a lot of ways to “Watchmen” by Alan Moore in that it takes place in an alternate universe (here it’s where John F. Kennedy was never assassinated) and stars a varied cast of characters. The graphic novels, in different ways than “Watchmen,” play on the idea of superhero story tropes.

“What drew us to ‘The Umbrella Academy’ is that it’s wholly unique, visual and stylized,” said Cindy Holland, vice president of original content for Netflix. “These aren’t the usual superheroes, and this series will embrace the singular tone of the graphic novels — dark yet humorous, supernatural yet grounded in reality.”

The first issue debuted in 2007. The first series won the Eisner Award in 2008 for Best Finite Series/Limited Series.

Also Read: Michael Keaton Is Batman and the Vulture: 27 More Stars in Both Marvel and DC Movies (Photos)

A screen adaptation has been in the works since at least 2010. At one point, Mark Bomback (“Dawn of the Planet of the Apes”) wrote a draft of the screenplay. “Dodgeball” director Rawson Thurber was brought on to rewrite in 2011. In 2015, a television adaptation with Universal Cable Productions was announced.

“I am thrilled that The Umbrella Academy has found a home at Netflix. I couldn’t think of a better place for the vision Gabriel Bá and myself had when creating the comic, and cannot wait for people to experience that world as a live action show,” said Gerard Way.

He also expressed his emotions towards the news on Instagram with some original art by Bá.