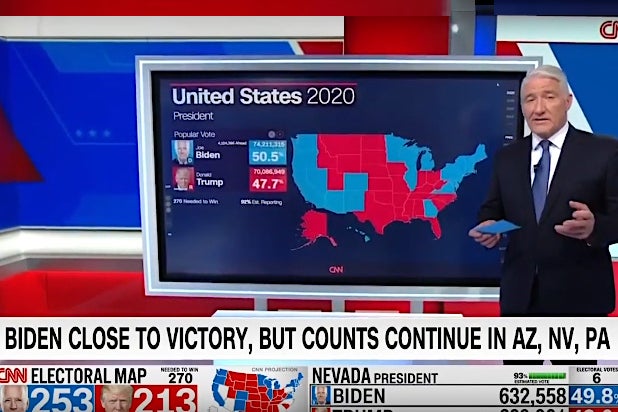 Networks came under fire from anxious voters for not calling Joe Biden as the winner of the presidential race, saying that they are cowed by Donald Trump or “placating” him.

CNN’s Brian Stelter and John King were hit with a string of smackdowns on social media Friday night for “not calling nevada two days ago and pennsylvania 12 hours ago.”

“John King has been doing this constantly,” another Twitter user responded, speaking of the CNN journalist. “As if he were talking to Trump directly. Literally saying ‘we’ want to be fair the President. By counting all the votes. Literally telegraphing that they are placating him.”

Those feelings of frustration have reverberated across social media. Wolf Blitzer stood in defense of his CNN decision desk and King, who masters the “big board.”

“I have covered a lot of these presidential contests over the years,” Blitzer said. “When you make a projection, you got to be really, really certain it’s not going to change.”

But King’s response is what set off viewers. “You have to do it in any event,” King said, “because credibility is everything, especially in those times when you have the President of the United States himself challenging what’s happening. Other people have a stake in this…you should have basic standards. The rules are the rules, no matter what. In this case, calling [Pennsylvania] would make Joe Biden the president-elect of the United States, and so you take extra, extra, extra care.”

His explanation, however, satisfied few.

“The decision desk are being negligent. If this wasn’t Trump it would be called. @Redistrict said as much (with a no comment) earlier. Let that sink in. They are hesitating due to the President being who he is,” Steven Anderson wrote.

But CNN wasn’t the only news agency on the hot seat. Judging by Brian Williams’ remarks, MSNBC has received the same complaints.

Also Read: Bill Maher Jokes Trump's Concession Speech Will Be 'Like the End of Scarface'

“Let’s deal with the elephant in the room,” Williams said to his co-anchor Friday night, Nicolle Wallace. “At least one presidential campaign and I’m guessing 90% of those in our television audience right now would really like us to call one or more of these states. Our decision desks, and this is the same at every network news division, work independently of us. We do not have contact with them. They have to stay in their bubble and decide the numbers as they must.”

Wallace — who went from loyal Republican when she served as the White House Communications Director during George W. Bush’s presidency and as senior advisor for John McCain’s 2008 presidential campaign to fiercely vocal Trump critic — added that the network’s master of the giant touchscreen, Steve Kornacki, was faced with similar challenges.

“[Steve Kornacki] has said now for days – for two days – that the ratio of the outstanding vote makes it mathematically impossible for Donald Trump to catch Joe Biden. So I guess what I would say about the elephant in the room, and I think it’s good to start here, is the end is probably near.”

Also Read: Bill Maher Jokes Trump's Concession Speech Will Be 'Like the End of Scarface'

Many U.S. news organizations use decision desks — a team of experts — to review exit polling and analyze incoming data about election results and project winners.

There are those, like Kevin at HeyGeek, who believe that maybe it’s time for a new method of calling elections: “then we need to shut down the decision desks entirely and simply wait for the Secretaries of State to announce their final results two weeks later. because this nonsense is unhealthy, both mentally and for the stability of the republic given the current Republican strategy.”