There’s a common adage that beautiful works of art — important art — can only come from a place of real suffering. It’s an adage that set writer-director Florian Henckel von Donnersmarck on the path to his newest film, “Never Look Away,” which is based on the life of German painter Gerhard Richter.

“My favorite book about filmmaking is Elia Kazan’s autobiography ‘A Life.’ He talks about his work with artistic geniuses and he says their artistic talent was the scab that formed on the wounds life had dealt them,” von Donnersmarck said during the question and answer portion of TheWrap’s screening series Wednesday night.

“That’s this very poetic phrase he used… and this film is about a genius painter and it’s a very beautiful analogy that you can stretch quite far, that if the wound is still open you can’t create art and once it’s healed you’re rewarded,” he continued. “I think the analogy works.”

Also Read: 'Never Look Away' Film Review: 'Lives of Others' Director Returns With Bold Tale of Art and Love 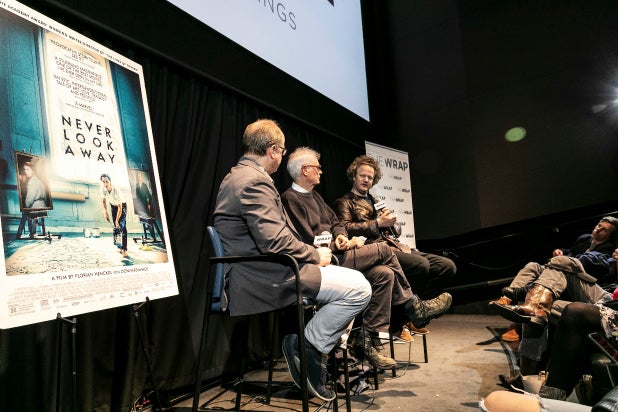 “Never Look Away,” which on Thursday earned a Golden Globe nomination for Best Foreign Language Film, is a sweeping romantic epic. The film, which spans three decades (1930s-1960s), follows the life of painter Kurt Barnert (Tom Schilling), who is a fictionalized version of Richter.

Barnert’s life is filled with beauty, heartbreak and tragedy that begins when his Aunt Elizabeth is carted away to a mental asylum and then to a Nazi death camp. As the emotional wounds mount for Bernert, he finds himself on a journey to discover art that truly speaks to him and his still open scars.

Also Read: How 'Never Look Away' Juggled Art, Love and the Madness of German History

“I was always on the lookout for a movie that would allow me to illustrate that whole thing and show how people would take their own suffering and turn it into something beautiful,” von Dommersmarck said. “I had this hope, and I still haven’t given that up, that I’d find it in the world of opera. I looked through all of my favorite operas and I didn’t find anything. Then, there was a journalist who wrote this in-depth portrait of Gerhard Richter in the early 2000s.”

The journalist, von Dommersmark said, uncovered a truth during his research for the profile that Richter himself hadn’t known until he was in his 70s: The father of the woman Richter married had been a high-ranking SS doctor, and was responsible for 900 of the forced sterilizations the Nazis performed in an era in which they were determined to weed out “inferior” blood, which led to his aunt’s death.

“I thought it would be interesting to show, here you have a young man trying to find his voice as an artist, trying to overcome his own suffering and at the same time he’s living under the same roof as a man, who he has no reason to think he’s responsible for it in any way, but on some instinctual level he must feel it,” von Dommersmark said.