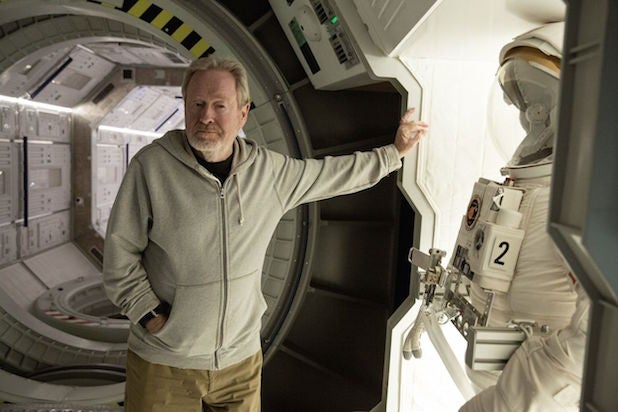 In recent weeks, the “Alien” Twitter page has been posting photos from the set of “Alien: Covenant” to tease Ridley Scott‘s return to the legendary sci-fi series he spawned. On Wednesday, a new photo showed the director himself planning out a scene with Michael Fassbender.

Accompanied by a cryptic caption reading “Creator. Creation.,” the photo shows Scott addressing the cast and crew, with Fassbender in the background. The British actor plays David, an android who is the sole inhabitant of a planet discovered by the voyagers of the colony ship Covenant. David appeared in the “Alien” prequel “Prometheus,” during which he was decapitated. If Fassbender is set to appear in the scene Scott is setting up in the photo, then it is possible that David could be returning with a new body and hairstyle.

“Alien: Covenant” is set to be the start of a new trilogy of “Alien” films all built on the events of “Prometheus.” Along with Fassbender, the film stars Danny McBride, Demián Bichir, Jussie Smollett, Carmen Ejogo, Amy Seimetz, and Callie Hernandez.