“New Amsterdam” gave Dr. Max Goodwin (Ryan Eggold) yet another impossible problem to solve with this week’s episode of the NBC medical drama, which saw Max and the staff grapple with the historic name of the New York City hospital and the brutal past that the New Amsterdam moniker conjures up for a Native American patient of Lenape descent.

TheWrap spoke with “New Amsterdam” staff writer Shanthi Sekaran about what she and showrunner David Schulner were trying to explore with the episode, which features Tantoo Cardinal (“Stumptown,” “Dances With Wolves”) playing professor Jane Munsee, a Native American woman who has a large blood clot in her leg but refuses treatment at New Amsterdam because of what its name represents to her as a Native woman whose people lost their land to the Dutch colonizers who renamed it New Amsterdam.

See our Q&A with Sekaran below about Max’s efforts to right the wrongs made against Jane’s people by trying to change New Amsterdam’s name — and that special moment he shared with Helen Sharpe (Freema Agyeman) at the end of the episode.

Where did the idea for this story about a Native American professor who refuses medical treatment at New Amsterdam because of its name come from?

We knew, [showrunner] David Schulner and I, we knew that we wanted to explore something having to do with Native American health, and our first thought was to go with something we’d been reading about, the Diné tribe, out west, also known as the Navajo tribe. But that didn’t make sense for a New York setting, because there is no reasonable reason that Diné people would come from out west to New York City during a pandemic. So I started thinking more locally about New York City and the Native Americans who are there. And because it’s a metropolis now, we have a real mix of Native Americans. It’s not just a centralized location for one or two tribes. So I was thinking about the Native population in that sense. And then I thought, if we rewind, if we take ourselves out of contemporary New York City, who were the people of New York originally? And that led me to learning about the Lenape. And then it led me to actually take a look at our name, and it was so obvious, it was right in front of me the whole time, our name was New Amsterdam. And of course, that was the name that commemorated the Dutch who came over and encountered the people who were living here already, the Lenape. So I found that really intriguing and I wanted to explore that.

Max isn’t able to get the hospital’s name changed, but he is able to create the Jane Munsee Medical Pathways Program at the hospital to give Native American students a direct pipeline into the medical profession. How did you arrive at this conclusion that, as Max acknowledges, can’t make up the the “atrocities” committed against Native people, but is an acceptable “start” for Jane?

The ending is something that we truly came to it as an ending. We didn’t pre-plan it. We didn’t know where the story was going to take us from the beginning. So it was really Max’s interactions with Jane that led us to try to make Jane comfortable and look for Native American personnel at the hospital and realize that there weren’t any. And that’s how we sort of came to the final plan, Max’s plan of the Pathways Program. But really we had to follow Jane as a character and think about what would make a difference to her. I think land acknowledgment is extremely important, but I wanted to dig deeper. And so I started thinking about the hospital setting itself and what would make Native Americans in New York City feel like part of the life of their hospital and like contemporary members of this hospital community. 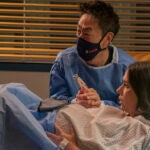 How did you land on Tantoo Cardinal as the Native American actress who would play Jane?

I wanted a woman with gravitas and authority, but also warmth. I didn’t want her to have just a combative relationship with Max, because really they share the same spirit. They’re both trying to change things, they’re both trying to make things better. So I wanted her to have that warmth as well. And our wonderful casting department, they were the first ones to think of Tantoo Cardinal, and I’m so lucky they did. And I’m really lucky that she agreed to do this script. I had heard that she hadn’t really been doing much that involved traveling. But she was willing to take this on, which was great.

The episode ends with yet another intimate moment between Max and Helen teased, as the two embrace to comfort each other after a long day and seem like they are about to kiss, before Helen tells Max she agrees with what he said earlier — that she is glad they are friends. What can you tease for “Sharpwin” fans where this relationship is going this season?

Max and Helen, what can I say about Max and Helen? I think we love Max and Helen when we get a little bit of them. I think we savor and kind of love the pain of not getting enough Max and Helen. So much of Sharpwin is based on not getting Sharpwin. Like, that’s where the passion lies. But for tonight’s episode, I would stay tuned. Think there might be something in there.