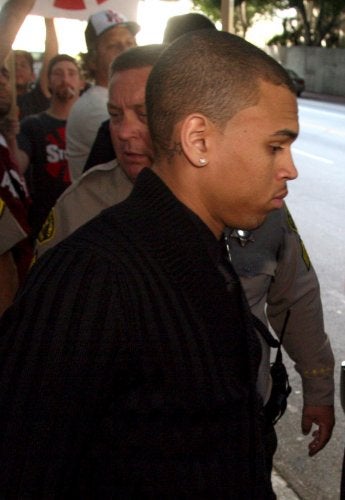 R&B crooner Chris Brown checked in with Superior Court Judge Patricia Schnegg Thursday afternoon to show that he’s on the road to becoming a model citizen, nine months after brutally slapping around his girlfriend at the time, the chanteuse Rihanna.

Brown was accompanied to Department 123 by celebrity lawyer Mark Geragos and a Praetorian guard of sheriff’s deputies — who requested reporters and court bystanders to “give us two feet.”

The 20-year-old pop star sat quietly through the brief proceedings attired in a suit jacket, vest and tie, along with three-inch cuffed blue jeans.

Judge Schnegg seemed to feel the celebrity power as she glowingly announced that the document before her was “an extremely favorable progress report,” and noted that Brown had served 66 hours of community service.

She was quickly, if  gratefully, corrected by Geragos, who pointed out that the figure is now more than 100 hours performed in Richmond, Virginia, where Brown lives.

Schnegg almost apologetically reminded Brown that he must appear in L.A. court personally every three months until the terms of his single-count plea agreement for assault are satisfied.

“Once you have completed your community service and domestic-violence program,” Schnegg assured the singer, “you no longer have to appear in person.” She also said that, while Brown remains free to travel anywhere domestically, he had only to ask to get her permission to fly out of the country to perform.

With that, Brown’s squad of eight deputies took him down a back staircase and out onto Temple Street. There, past a yellow-tape gauntlet of news crews, awaited Brown’s ride. Without saying a word he strode past the press and into the inevitable black Suburban.

He’ll return Feb. 18 for the next hearing.