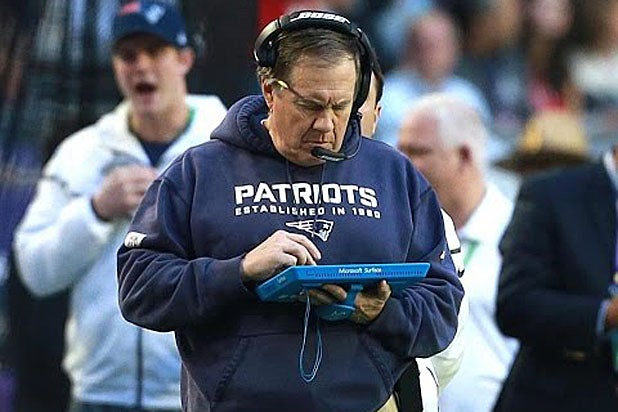 New England Patriots coach Bill Belichick has an ax to grind, and its not against any of the team’s AFC East rivals.

The old-school football genius is officially boycotting computer tablets, and is letting the world know it in no uncertain terms.

“As you probably noticed, I’m done with the tablets,” Belichick said during his Tuesday conference call, ESPN reported. “I’ve given them as much time as I can give them. They’re just too undependable for me.”

Belichick, who is infamous for his deadpan responses to most reporters’ questions, issued his proclamation after smashing a tablet on the sidelines following the Patriots’ devastating shutout by the Buffalo Bills on Oct. 2. The dramatic move quickly went viral and was compared by many to a Gronk Spike — the signature touchdown celebration of his top tight end, Rob Gronkowski.

“I’m going to stick with pictures as several of our other coaches do as well, because there just isn’t enough consistency in the performance of the tablets. I just can’t take it anymore,” Belichick said in his rant about the Microsoft Surface tablets commonly used by NFL teams’ coaching staffs.

“I’ve given it my best shot,” he added. “I’ve tried to work through the process, but it just doesn’t work for me, and that’s because there’s no consistency to it.”

Microsoft swiftly issued a statement defending their product against Belichick’s criticism. “We respect Coach Belichick’s decision, but stand behind the reliability of Surface. We continue to receive positive feedback on having Surface devices on the sidelines from coaches, players and team personnel across the league. In the instances where sideline issues are reported in NFL games, we work closely with the NFL to quickly address and resolve,” the tech company said, according to ESPN.

The NFL also stood by the partnership with Microsoft, claiming in a statement that since the league began using tablets “the efficiency and speed of communication between coaches has greatly increased.”

In January, both the Patriots and the Denver Broncos suffered from a severe lack of efficiency from their team tablets during the AFC Championship game.

“That last defensive possession the Patriots’ coaches did not have access to those tablets to show pictures to their players. NFL officials have been working at it. Some of those tablets are back in use but not all of them. A lot of frustration that they didn’t have them on that last possession,” CBS reporter Evan Washburn said, according to TechnoBuffalo.com.

Microsoft paid the NFL around $400 million in 2013 for exclusive branding rights to the tablets during games, which are used to view replays, plan plays, etc.

However, in the Pats’ 35-17 victory over the Cincinnati Bengals on Sunday, Belichick was spotted going back to his roots and rapidly flipping through pictures on the sideline.

See video below of Belichick spiking his old Surface earlier this month.

When you wanted an #iPhone7 for your birthday but got a tablet instead… https://t.co/joLq3I7PR7 (via @CauldronICYMI )

Bill Belichick has been spending way too much time with Gronk https://t.co/HLTNuiqqJp