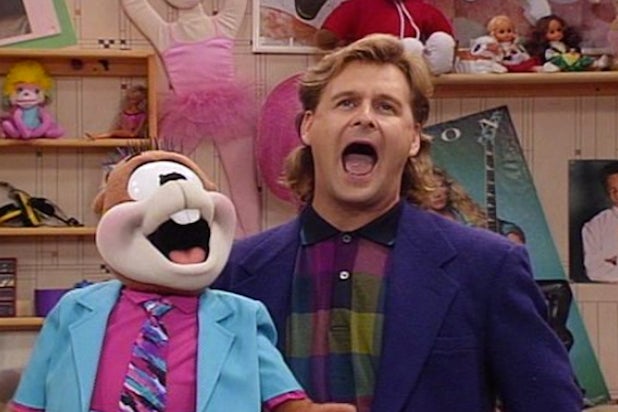 Coulier, who played funnyman Joey Gladstone on the popular 90’s sitcom, will appear in at least one episode of “Fuller House.” Coulier is set to reprise his Uncle Joey role in a special reunion episode of the series. No word yet on if he will make additional appearances.

In addition, the character descriptions for the child characters on “Fuller House” have been revealed. The series will feature three children: two boys who are the sons of DJ Tanner (Candace Cameron Bure); and one girl, who is the daughter of Kimmy Gibbler (Andrea Barber).

Read the full descriptions below:

“JD” (JESSE DANIEL) 12-13 years old – Just like his blue collar fireman Dad, JD is tough, athletic, strong-willed. He
idolized his father and is not adjusting well to losing him. JD is always testing limits, breaking the rules and questioning authority. A handsome kid and already a ladies’ man, juggling three girlfriends. He plays
guitar, sings, and loves to ride a dirt bike like his Uncle Jesse (John Stamos).

JD is trying to toughen up his geeky little brother Max. He resents DJ constantly pushing him to read, do charity
work, and generally de-shallow.

MAX 6-7 years old- Max is hyper, goofy, awkward, and kinda geeky. Much like his Grandpa Danny (Bob Saget), he takes tremendous pride in keeping his room tidy, his shirt tucked in, and has already mastered the art of hospital corners. Max is smart, curious about the world, and loves technology, computers, gadgets — and money. He sings
out of tune, dances has no rhythm. Max looks up to his older brother, and is always searching for his
approval.

RAMONA 12-13 years old-Ramona is bi-racial, passionate, sharp-tongued, tough, kooky, a drama queen. Ramona considers herself Latina and has fully embraced her Latin heritage even though she is half-white. Living with the
white-bread Tanners is totally lame.

Ramona is bright, but not into school. She’s obsessed with her friends, boys, fashion, being cool, social media and taking pics every second of every day. Ramona worships her Dad, but resents Mom for breaking up the family, even though Dad is a troublemaker. She is experiencing the trials and tribulations of being a teenage girl, and the mood swings that come along as a result.

The character descriptions were first reported by Showbiz 411.

The new series, which has received a 13-episode order from Netflix, will bring back series stars Bure, Jodie Sweetin and Barber. Stamos will produce, as well as guest-star. Negotiations with the Olsen twins, Saget, and Lori Loughlin are ongoing.