Prepare to be amazed by the stunning animated visuals in the  “Love, Death + Robots” Volume 3 trailer, which dropped Monday from Netflix.

Volume 3 of the series, from executive producers Tim Miller and David Fincher, will span nine episodes. Some uncover ancient evil, while others explore a comedic apocalypse. The show will tell fantasy, horror and sci-fi stories across its third run.

In his first work directing animation, Fincher helms the “Bad Travelling” episode (yes, two L’s). Here’s its synopsis: “A jable shark-hunting sailing vessel is attacked by a giant crustacean whose size and intelligence is matched only by its appetite. Mutiny, betrayal and ventriloquism with a corpse… welcome aboard the animation directing debut of David Fincher.” 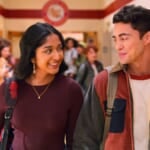 Nelson is the supervising director of the Emmy-winning series.

The series returns May 20 on Netflix.