Oh, what it must be like to be Robert Pattinson right now.

The "Twilight Saga" star is off-screen for the bulk of the franchise’s second entry, "New Moon," but the object of seemingly universal affection and his distinctive wavy mane loomed large at Monday night’s premiere in Westwood — both before and after the screening. 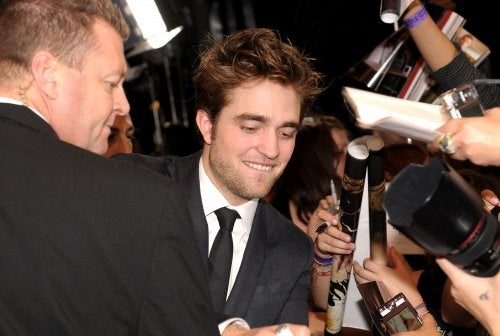 Everyone expected the shrieking hordes on the streets outside of the Mann Village and Bruin theaters, where the movie was shown, to be calling out lustfully to the English actor. (See a slideshow from the premiere here.)

Less anticipated was the frenzy he created when he entered the invitation-only after-party hosted by Summit Entertainment at the Hammer Museum.

The guest list for the swank soiree was A-list, but that didn’t stop the elegantly tailored partygoers from reaching out across a menacing cadre of security guards to touch Pattinson’s arm, mounting chairs and rock gardens to strain for a better view, and furtively snapping pictures with camera phones.

The Byronic brooder looked stylish in a crisp black Gucci suit with a healthy coating of stubble as he signed autographs and, with a shy half-smile, acknowledged the crowd and its seemingly limitless ardor.

As for the party itself, it continued into the wee hours of the night.

Larry David, wearing a baseball cap that was most definitely not Gucci, cut through the clusters of "Twilight" stars and Summit executives. Waiters, dressed in red cloaks meant to evoke the capes worn by the film’s villains, a coven of vampires known as the Volturi, glided by with plates of wild mushroom bruschetta and pizzas.

Those looking for more substantial fare grazed at a 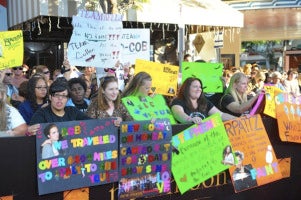 buffet that included roast chicken, tortellini with a bolognese sauce and vegetable risotto.

For dessert there were gelato stations interspersed among the party’s seven bars, and tables overflowing with cupcakes from Crumbs Bake Shop that were festooned with wax vampire teeth.

The spacious central courtyard was outfitted to look like Volterra, the medieval Italian village where the vampire villains reside. There were large stone fountains, bright red tapestries and oversized white couches with elaborate swirling backs that looked like a fusion of Victorian and Vegas.

The pièce de résistance, however, was a tent outfitted with pine trees and a towering, moss-cloaked fountain — a nod to the film’s lush Forks, Washington, setting. At the center of this makeshift evergreen fantasy land was a pen filled with two serene-looking, albeit very live, timber wolves (the film’s sequel turns on a conflict between vampires and a pack of werewolves).

The setting was quite a contrast to the one surrounding the red carpet earlier in the evening, where the film’s stars — Pattinson, Kristen Stewart, Dakota Fanning and Michael Sheen — and the book’s reclusive author, Stephenie Meyer, rubbed elbows with famous fans such as 50 Cent, Joan Jett and Jennifer Love Hewitt. 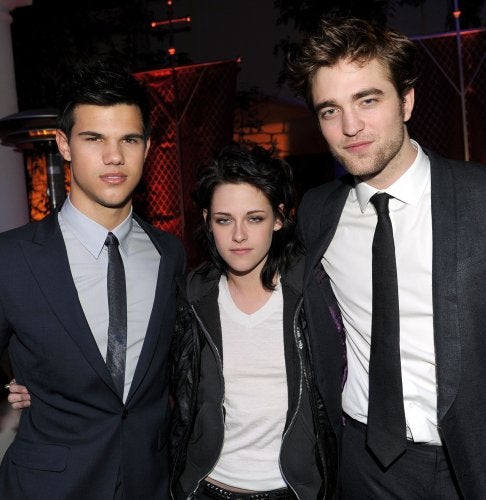 As they made their way past a flashbulb frenzy, they passed through a sea of homemade signs, emblazoned with messages such as "Rob Call Me," "Bite Me" and the even more direct "Taylor Take Your Shirt Off," referring to Pattinson’s similarly hunky co-star, Taylor Lautner.

The overwhelmingly female crowd, ranging from tween to comfortably middle-aged, had begun assembling outside the site as early as last Thursday in the hopes of snagging one of 800 tickets Summit was handing out to fans.

"I’ve never done something like this before," said Lehua Alapai, a schoolteacher who’d traveled all the way from Hawaii for the event. "I just wanted to be here to share in the camaraderie. The amazing thing about these books is that they have gotten people reading again."

In between shrieking for Pattinson and his similarly hunky "Twilight" co-star Lautner, Alapai stood near the reception line with a sign hoisted over her head that read "Give Us Three Tickets, We’ll Give You Hawaii. Inquire Within."