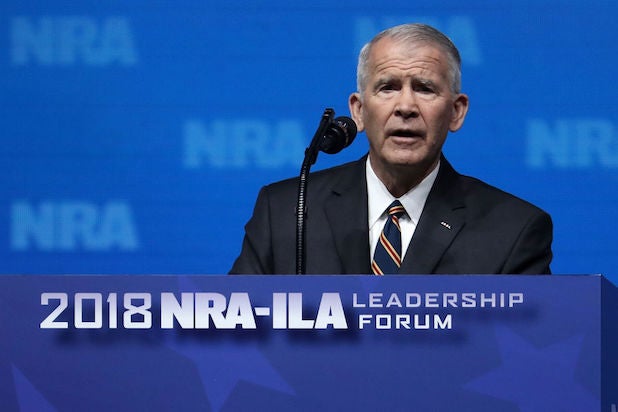 Oliver North, the new incoming president of the National Rifle Association, said Wednesday that the pro-gun lobby group has been a victim of “civil terrorism” by political opponents.

North, who is best known for his role in the Iran-Contra scandal of the 1980s, compared the country’s anti-gun sentiment to Jim Crow-era racism.

“They call them activists. That’s what they’re calling themselves,” North told The Washington Times. “They’re not activists — this is civil terrorism. This is the kind of thing that’s never been seen against a civil rights organization in America.”

The NRA has been under intense scrutiny since the deadly mass shooting at Marjory Stoneman Douglas High School in Parkland, Fla., in February, which left 17 dead. The incident sparked renewed calls for more gun control.

North’s comments come just two weeks after a Nebraska woman was charged with spraying the home of a Virginia NRA lobbyist with fake blood.

“What they did very successfully with a frontal assault, and now intimidation and harassment and lawbreaking, is they confused the American people,” North said. “Our job is to get the straight story out about what happened there, and to make sure that kind of thing doesn’t happen again because the proper things are being done with the advocacy of the NRA.”

North, a television host and retired Marine Corps Lieutenant Colonel was named president of the National Rifle Association on Monday. He replaced outgoing president Pete Brownell, who declined to seek another term, citing a desire to spend more time with his family.

North was convicted in the Iran-Contra scandal of 1991 in which senior officials of the Reagan administration secretly facilitated the sale of arms to Iran. He has most recently worked as a host on Fox News, a role from which he will be retiring “effective immediately.”

North takes charge at an increasingly fraught time for the organization, which has found itself embattled after waves of gun violence have swept the United States in recent years. The group is facing stiff challenges since the massacre at a Parkland, which escalated the national debate over gun control laws.