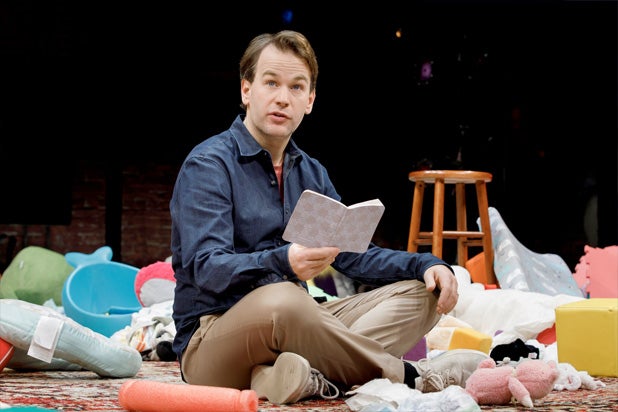 In the last decade, Mike Birbiglia has emerged as one of America’s most gifted comedians and monologists, delivering his brand of suburban self-deprecation and Everydude wit in shows like “Sleepwalk With Me” and “My Girlfriend’s Boyfriend.”

And now Birbiglia has brought his latest routine, aptly titled “The New One,” to Broadway, where he settles into a much larger space with the same slackerly geniality that has served him well in smaller venues.

His subject here is parenting — and his admitted reluctance to join the club that seemed to bring tears of both joy and frustration to so many of his peers. “My brother used to be cool,” he notes early on. “Then he had two kids.”

Part of Birbiglia’s reluctance stems from a fear of a diminished status in his own home — and with a wife he seems to truly adore. “I didn’t know what ‘nothing’ meant until I became a dad,” he says. “You’re this pudgy milk-less vice president of the family. Your whole job is to be around and have no opinions.”

Don’t let Birbiglia’s Build-a-Bear physique, schlubby uniform (khakis and ill-fitting casual shirt) or milquetoasted voice fool you. Or maybe do — because his very relatability allows him to get away with surprisingly sharp-edged humor about some very serious subjects.

When Birbiglia runs down a numbered list of his arguments against having kids, most revolve around his own insecurities and suspected shortcomings as a dad. “If we’re being honest with ourselves, kids hold us back,” he says, before edging into more charged waters. “My best example of this is the history of women.”

This is just one of the outrageous, did-he-just-say-that? shockers that Birbiglia laces into his routine — one that he quickly walks back with a convoluted explanation about how “women are smarter than men, their brains are more sophisticated, and they make 21 cents on the dollar … How did this HAPPEN!? The answer is…children.”

No, the logic doesn’t quite track — but he somehow manages to verbally dig himself out of his own rhetorical hole, like any quick-thinking husband might when he finds that he’s run afoul of the Mrs.

In another revealing moment, he recalls a seven-hour drive home with a bad case of the flu to a sleepless newborn and a yelling wife. At that low point, he confesses, “I get why dads leave.”

Not that Birbiglia himself ever would, of course (“I love my wife and where would I go?”), but he finally understood the impulse.

After all, the guy who went to Amsterdam’s Red Light district when he was 23 and chose the prostitute with the shortest line (“she was a cross between Matt Damon and Bill O’Reilly”) is the sort of guy who sticks around, even when things get a little rough. Maybe because he’s able to laugh at the situation — and make everyone else laugh, too.