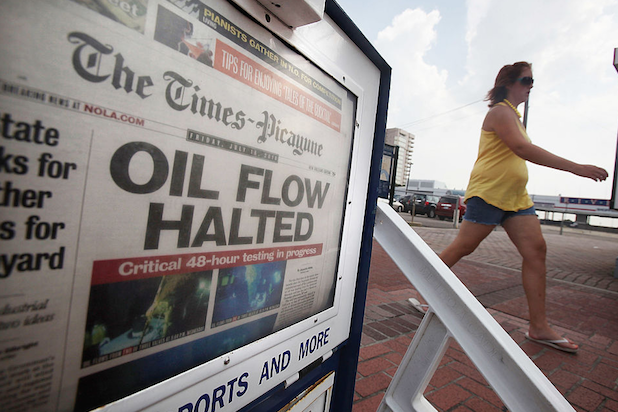 The entire staff of The Times-Picayune in New Orleans is being laid off after the paper was sold on Thursday to The Advocate, a rival newspaper.

The layoffs will impact all 161 staff members at the Times-Picayune, including 65 editors and reporters, according to a WARN (Worker Adjustment and Retraining Notification Act) filing with the Louisiana Workforce Commission cited by the New York Post. Reps for the Louisiana Workplace Commission.

Advocate Publisher Dan Shea told the Post he planned to rehire an as-yet-undetermined number of Times-Picayune staffers before combining the two publications in June as a daily paper and using the nola.com website.

The Advocate and Times-Picayune did not immediately respond to TheWrap’s request for comment.

On Thursday, John and Dathel Georges, owners of the New Orleans Advocate, purchased The Times-Picayune and its nola.com website from Advance Publications for an undisclosed sum.

Times-Picayune writer Haley Correll tweeted on Thursday evening she cried after finding out “the whole newsroom” would be losing their jobs in 60 days. She included a brokenhearted emoji.

Last night, I stood in Pulitzer Hall at Columbia and accepted The Dart Award. Today, I ugly cried on an airplane as I heard @NOLAnews was bought and we’re all losing our jobs in 60 days. The whole newsroom.

The two papers have been competitors for nearly two centuries, with The Times-Picayune first publishing in 1837; The Advocate traces its roots back to 1842.

The Times-Picayune has fallen on hard times in recent years; the Post reported its weekend circulation of 88,538 falling well below its circulation of 257,000 before Hurricane Katrina hit the city in 2005.

The layoffs reinforce the harrowing position of many once-formidable media companies. Media layoffs hit a 10-year high last year, with nearly 15,500 jobs being axed in 2019. This year hasn’t had an auspicious start, either, with several major media outlets like Vice, BuzzFeed and HuffPost all cutting jobs.