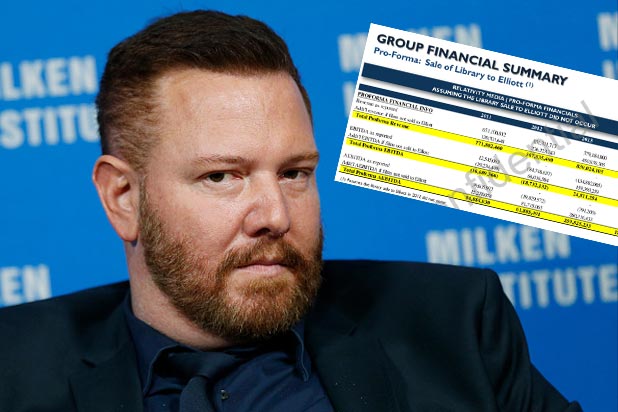 As the Relativity Media bankruptcy continues to play out, more financial details from the company’s recent operations are emerging that confirm the studio’s mounting losses over the past few years.

Relativity posted negative net income for the last three years, losing an astonishing $135 million in 2013 on $379 million in revenue, according to a pro forma document obtained by TheWrap (see image).

In 2014, Ryan Kavanaugh’s company lost a comparatively modest $23 million in earnings before interest, taxes, depreciation and amortization (EBITDA) on $506 million in revenue.

Also Read: Requiem for Relativity - Hollywood Should Mourn the Loss of a Studio

Relativity filed for Chapter 11 bankruptcy in New York on Thursday, with a newly named chief restructuring officer, Brian G. Kushner of FTI Consulting, in charge of overseeing the company as it prepares for a sale of the company’s assets.

But the court filings did not reveal the performance of the company in previous years, as does the document obtained by TheWrap. The document appears to have been prepared for a potential investor, with numbers calculated to project the performance of the company had it not sold a piece of its film library in 2012 to Elliott Management, a New York-based hedge fund that had been a key investor in Relativity.

That additional film income would have pushed the company into profit, according to the document. “EBITDA” reflects earnings before interest, taxes, depreciation and amortization; it’s unclear how the adjusted EBITDA (AEBITDA) figures were calculated.

A Relativity spokesman declined to comment on these numbers.

The studio had a tough 2013 despite two hits. “Free Birds,” an animated Thanksgiving comedy grossed $110 million domestically on a $55 million budget, and “Safe Haven,” a Nicholas Sparks adaptation starring Julianne Hough and Josh Duhamel, grossed $97 million on a $28 million budget.

But “Don Jon,” a comedy acquired at Sundance starring Joseph Gordon-Levitt, Scarlett Johansson and Julianne Moore topped out at $30 million after Relativity spent $4 million on the rights and $25 million on marketing.

Here were the studio’s releases that year:

Though the company generated $501 million in revenues last year, another court filing indicated that Relativity’s outstanding debt exceeded $330 million when it matured on June 1, 2015 — bigger than has previously been reported.