For most moguls, six years outside of Hollywood’s executive suite could mean the end of an entertainment industry career. But new Sony Pictures CEO Tony Vinciquerra spent his time on the outside learning exactly the skills he needs to ensure the embattled company’s survival.

As a senior advisor to TPG Capital — whose portfolio companies include disruptors Uber and Airbnb — Vinciquerra returns to the Hollywood C-suite with decades of content and distribution experience. But he’s also gained insight into the emerging business models the company needs to innovate,  insiders told TheWrap.

And he has the unflappability Sony needs now, they said.

The former chairman of Fox Networks Group has been a front runner to replace Michael Lynton as Sony Pictures’ CEO since early spring. A handshake deal was reached last Friday and the 61-year-old Vinciquerra tucked in to his weekend making calls to free himself from conflicts presented by his TPG role, one insider familiar with the negotiations told TheWrap.

Those include his seat on the board of Bob Simonds’ STXFilms — a spot he’ll rescind amicably, the individual said. He also holds advisory roles at media companies Machinima, Univision and Pandora.

“I was surprised,” said a former top Fox executive who worked with Vinciquerra, who didn’t expect him to come back to the day-to-day stress of running a studio. “He’s still a very relevant executive who has seen what the new entertainment economy looks like.”

Walt Disney International Chairman Andy Bird and current Fox Networks Chairman Peter Rice had reportedly been floated as candidates, but none emerged as confidently as Vinciquerra to replace Lynton, who assumed the role in 2004 and nursed the studio through its darkest hour, a 2014 hack by North Korea that President Obama called the worst in American corporate history.

Here’s what Vinciquerra is inheriting: a busy TV division run by Zack Van Amburg and Jamie Erlicht, who stepped in for the bullish and charismatic Steve Mosko last year. Both have expired, unrenewed deals, an insider on the lot said.  Then there’s the motion picture group, still struggling to find footing under Vinciquerra’s old Fox colleague, Tom Rothman.

Rothman’s own deal is up in 2018, the individual said. Vinciquerra will not make any abrupt staff changes when he takes Lynton’s office, multiple Sony insiders said, though he’ll closely study the lines of business.

“Tony is a very even-keeled, thoughtful guy with an enormous background on all things distribution, and a lot of experience in managing creatives as well,” said the former Fox executive, who, like other insiders quoted in this story, spoke on condition of anonymity. “He always gave creatives leeway to do things, but also instilled a sense of fiscal discipline.”

Vinciquerra’s reputation as a custodian of the books was likely a big factor in his landing the job. Sony’s film studio hasn’t placed higher than fourth in market share since 2012 and finished fifth last year, just 0.3 percent higher than sixth-place Paramount, despite releasing 7 more movies during the year.

Expensive misfires like “Ghostbusters,” which grossed just $230 million worldwide on an estimated $144 million budget, contributed to the studio’s 4 percent dip in revenue between its 2016 and 2017 fiscal years – a time when Disney was setting box office records. Earlier this year, Sony took a nearly $1 billion writedown tied to its pictures division when it lowered future profit forecasts. 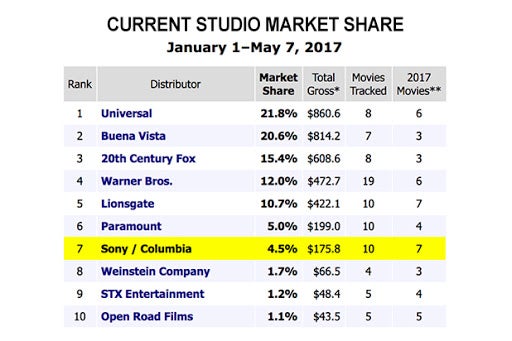 Sony has had some hits — earlier this year, Screen Gems’ “Resident Evil: The Final Chapter” made $312 million worldwide on a $40 million budget. (But $160 million of that was in China where box office splits are much less favorable to studios.) Its upcoming slate appears mixed: “Spider-Man: Homecoming” should be a reliable draw, but “The Dark Tower” and “The Emoji Movie” are riskier bets. Scarlett Johansson’s “Rough Night” should work.

The former Fox exec said Rupert Murdoch’s empire was known for its watchful financial eye, and Vinciquerra’s training in that environment could help Sony tighten its belt on the TV side, as well. He said when he was at Fox, he remembers Sony’s TV deals being “incredibly rich.”

“Fox is one of the most financially disciplined companies,” he said. “Anyone that came from Fox sat in front of Rupert Murdoch. You need to know your s— and know it very well. There’s sort of a discipline you find at Fox that you won’t find at any other company.”

Furthermore, Vinciquerra’s steady hand — the former Fox exec said he’d never seen the new SPE boss lose his cool when faced with adversity — should be an asset at a studio that’s still recovering from the hack.