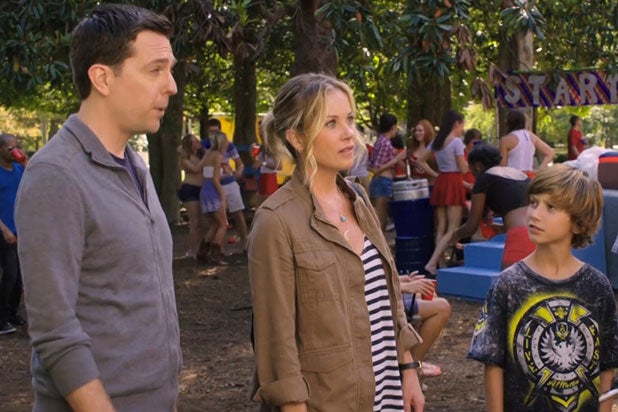 In a new trailer for Ed Helms‘ “Vacation,” things get dirty, naughty and explicit as the Griswolds go on a family vacation to Walley World.

The NSFW trailer, released Wednesday, drops so many F-bombs and dirty jokes that viewers must enter their age to see it.

The trailer also reveals new information about the characters. Debbie Griswold, played by Christina Applegate, was known as “Debbie Do Anything” at her college sorority; Kevin, the couple’s youngest son, curses like a sailor; and someone is going to fall off a huge waterfall, which is just one of the many things that go wrong on their family vacation.

“Vacation” follows a dad, Rusty Griswold, who takes his family on a road trip to “Walley World” to spice things up with his wife and get closer to his sons.

The 1983 film, originally titled “National Lampoon’s Vacation,” was a box-office hit, earning $61.4 million in the U.S. on an estimated budget of $15 million.

Chevy Chase and Beverly D’Angelo are reprising their roles in the reboot as Rusty’s parents.

The Warner Bros. film will hit theaters on July 29.

49 Summer Movies on Our Radar: From 'Amazing Spider-Man' to Tina Fey's Next Comedy (Photos)

Blockbuster movie season begins in May. Here are 49 movies that may or may not tickle your cinematic taste buds this summer.