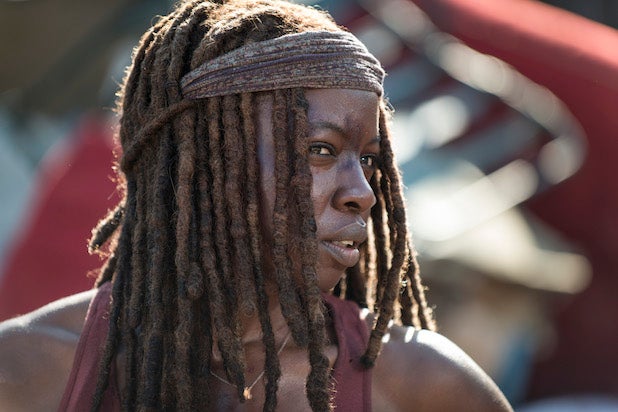 It looks like the next chapter in the zombie apocalypse is for the girls.

“We’re going to see some really great stories with the women on our show [in Season 9],” “Walking Dead” showrunner Angela Kang said at AMC’s “Kick-Ass Women of AMC” panel in New York Wednesday. “I think for people who are really invested in, say, Michonne [Danai Gurira], Maggie [Lauren Cohan], Carol [Melissa McBride], there’s such great material for them.”

Kang, who has been on the writing staff since Season 2 and was promoted in January, added that there’s still great material for leading men Rick (Andrew Lincoln) and Daryl (Norman Reedus), “but for people who are looking for that specifically they will really see some incredible work from our women.”

With news that Lincoln will be phased out during Season 9, it’s not altogether surprising that the writers would focus on bringing the female characters’ stories to the forefront, though Kang didn’t address reports of the star’s exit. She also avoided rumors that Cohan will be leaving after Season 9 (she’s only locked in for six episodes for sure, and is starring in the new ABC series “Whiskey Cavalier”).

Fans can expect to dive more deeply into Anne (formerly known as Jadis, played by Pollyanna McIntosh)’s story next season, too.

“I think we’re going to see Anne in a way that people will be very surprised by seeing a different aspect of her character,” Kang teased.

The showrunner added that the women on the zombie drama don’t need any help from their male counterparts.

“They go toe to toe with the men,” she said. “We don’t write damsels in distress.”

If anything, Kang added, “the men are males in distress. The women save the men just as much as the men save the women. It’s really a story about survivors who help each other through the apocalypse.”

“The Walking Dead” will return to AMC this fall for Season 9.