A new website is here to help you keep track of our president’s many trips back and forth between the White House and his Mar-a-Lago resort in Palm Beach, Florida. Is he currently at Mar-a-Lago? No. But as the site notes, he has been there seven out of 13 weekends as president. 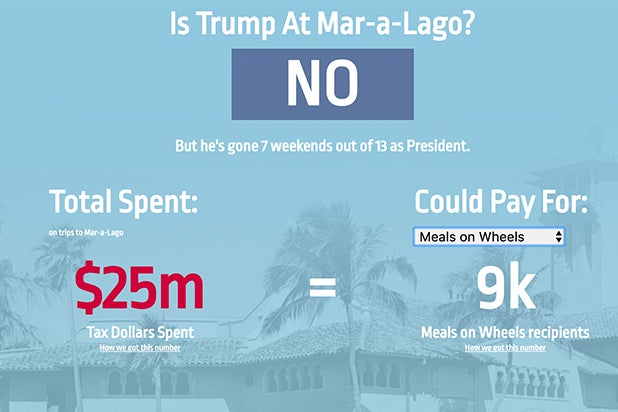 The site, Is Trump At Mar-a-Lago, also includes a handy factoid, according to a Government Accountability Report: A trip to Mar-a-Lago costs taxpayers more than $3 million. As Trump makes his trips, the total number spent goes up on the site’s tally. As of now, it’s at $25 million.

To make that number pack an even bigger punch, the watchdog site also shows what that $25 million could have been spent on. Like, for instance, it could help feed 9,000 meals on wheels recipients; provide food for 61,000 children on the National School Lunch program; or help 4,000 medicaid recipients get healthcare. 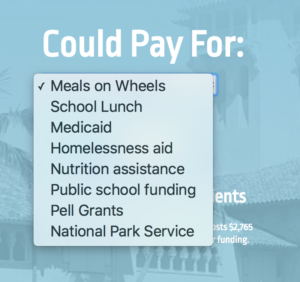 The website was launched by the Center for American Progress Action Fund last week. “It’s supremely hypocritical of Donald Trump to spend millions of government dollars at Mar-a-Lago while crusading to cut vital programs such as Meals on Wheels,” CAP Action Fund Press Secretary said in a news release. “Our tracker will provide context and keep Trump accountable for his out-of-control spending at taxpayers’ expense.”

In March, democrats introduced the Make Access Records Available to Lead American Government Openness Act, or the Mar-a-Lago Act, in an effort to make publicly available visitor logs from the White House and the resort.