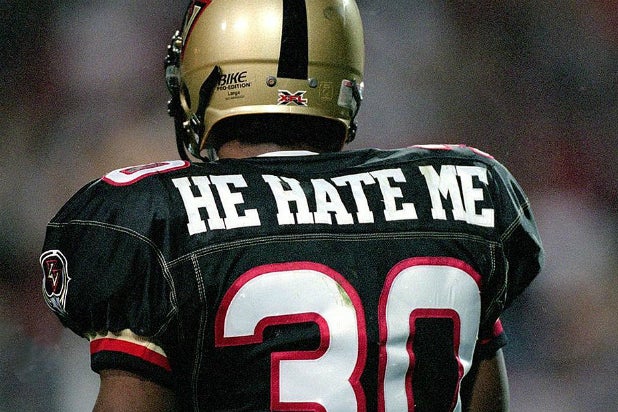 “He Hate Me” may be retired from professional football, but Rod Smart’s legacy could live on in Vince McMahon’s new XFL.

On a Thursday conference call, TheWrap asked the WWE chairman if he plans to allow nicknames (as opposed to just given surnames) on the backs of jerseys in the 2020 NFL-alternative reboot — an option that McMahon’s short-lived professional pigskin league got a lot of attention for the first time around.

The Las Vegas Outlaw player’s “He Hate Me” (pictured above) is the one everyone remembers.

“I’m not sure about the individuality of the ‘He Hate Me’ — we’re not there yet,” McMahon told TheWrap. “But it’s amazing that people remember that.”

“Rod Smart — the player that [wore] ‘He Hate Me.'” That was extraordinary,” he continued. “Whether or not we do that or not. Again, we’re gonna listen to football experts, we’re gonna listen to what the audience– what fans want, more than anything else. And we’re gonna be listening to [the media] as well, in terms of what you think would be appropriate.”

Also during the call, TheWrap asked McMahon if he could specify whether making players stand for the national anthem would actually be in his XFL rulebook.

“It’s a time-honored tradition to stand and appreciate the national anthem with any sport,” he responded. “Here in America — for that matter, in any country… So I think it’d be appropriate to do that.”

Tell that to the NFL Players Association.

“Whatever our rules are is what everyone will abide by,” McMahon had said earlier during the conference call, when he was first asked by a different outlet about an allowance or disallowance for free speech in his league.

Knowing where the indirect question was really headed, the businessman brought up the anthem on his own.

Plans for the new XFL at launch include eight teams, 40-man active rosters and a 10-week regular season schedule, with a postseason consisting of two semifinal playoff games and a championship game.