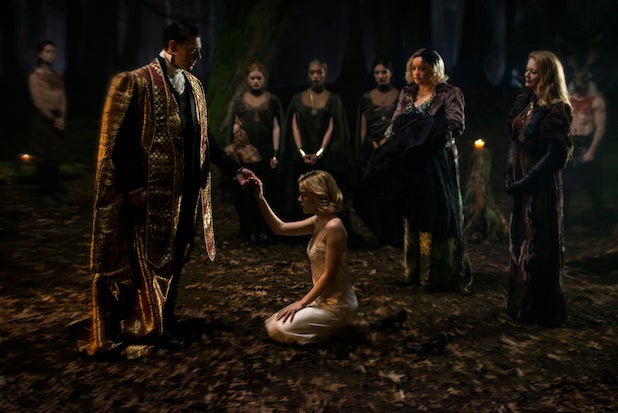 New York Comic Con 2018 is well underway, and today fans can Netflix and Chill in a whole new way.

The streamer is leaning into the spookiness October brings with a two-hour block in the Javits Convention Center featuring the casts of “The Umbrella Academy,” “The Haunting of Hill House” and “Chilling Adventures of Sabrina” and a first look at “The Dark Crystal: Age of Resistance.” That all kicks off at 7:30 p.m.

Other highlights to look forward to moving into the weekend: Hulu is appealing to its younger demo with the returns of “Marvel’s Runaways,” ahead of its second season premiere in December, and the Josh Hutcherson-led “Future Man.”

FX’s vampire comedy series “What We Do in the Shadows” from Taika Waititi will have a panel in the Hammerstein Ballroom on Sunday, where executive producers Waititi, Jemaine Clement and Paul Simms will join fans for a panel discussion. FX will be bringing “Archer” in for a panel Sunday as well.

Syfy previously announced their lineup, adding panels and screenings for the upcoming George R.R. Martin-created “Nightflyers” and Russo Brothers-produced “Deadly Class,” along with the Season 2 of the Christopher Meloni-led “Happy!” and a “great debate” panel to be moderated by Aisha Tyler.

Netflix is bringing chills with a block of thrillers, including “The Umbrella Academy,” “The Haunting of Hill House” and “Chilling Adventures of Sabrina,” on Friday at the Javits Convention Center main stage. The streamer will also bring fans the first tease of “Daredevil” Season 3 on Saturday.

Warner Bros. is bringing out the big guns to kick off Wednesday with a world premiere screening of “Titans,” the first live-action series from the new DC Universe streaming service, on Oct. 3. The series will debut on the digital platform on Oct. 12.

Along with introducing its new series “Tell Me a Story,” CBS All Access will be hosting a panel for its sophomore sci-fi drama, “Star Trek: Discovery,” which will be landing at the Theater in Madison Square Garden on Saturday. Then the “Charmed” reboot flies in for a sneak peek and panel Sunday afternoon.

Meanwhile, Fox has sessions lined up for “The Gifted” and “The Orville” to talk about their respective second seasons and to introduce its new drama, “The Passage.”

The weekend will also have screenings and Q&A sessions for the “Vampire Diaries”/”The Originals” spinoff “Legacies,” “Roswell, New Mexico,” “Manifest” and “Blindspot.”

The “Riverdale” cast appears at Madison Square Garden on Sunday to tease its third season, which premieres on Oct. 10, followed by yet-to-be-announced stars from “Gotham.”

Check out the New York Com-Con lineup below.

Join Jeph Loeb, Head of Marvel Television, along with the cast and executive producer, as they let you in on what’s to come for the highly-anticipated Season Two of the Hulu Original Series, Marvel’s Runaways. You won’t want to miss this fun-filled event! And don’t forget all 13 episodes of Marvel’s Runaways Season Two will drop on December 21, 2018, only on Hulu.

Join the cast and producers for an exclusive sneak peek and panel discussion of new CBS ALL ACCESS series “Tell Me a Story,”  a psychological thriller from the brilliant mind of Kevin Williamson which premieres on Halloween 2018.

Join the casts of “The Umbrella Academy,” “The Haunting of Hill House” and “Chilling Adventures of Sabrina” as they descend upon New York Comic Con to discuss their highly anticipated new series’. Plus, get a first look at “The Dark Crystal: Age of Resistance” before anyone else.

Also Read: Not Fall TV: Here Are All the Broadcast Shows That Won't Premiere Until Midseason

Also Read: Welcome to The CW's Super Season: Supergirl, The Flash, Arrow Are Back in New Trailer (Video)

Based on Justin Cronin’s best-selling fantasy book trilogy, join cast and producers of FOX’s epic, character‐driven thriller about a secret government medical facility experimenting with a dangerous virus that could either cure all disease or cause the downfall of the human race, for a sneak peek screening of the Pilot episode, followed by a moderated conversation with stars.

From Emmy Award-winning executive producer and creator Seth MacFarlane, “The Orville” is back for Season 2! Join the some of your favorite crew members, Adrianne Palicki, Penny Johnson Jerald and Scott Grimes who have traveled straight from the U.S.S. Orville along with the creative geniuses behind the whole operation to get an exclusive look at some of the new and exciting missions coming to FOX on Sunday, December 30th. Plus you never know who might call in to the panel from the Planetary Union.

Join the cast and producers of “Discovery” as they discuss the legacy of the franchise, and what adventures await the CBS ALL ACCESS Original Series as it warps into Season 2.

Join executive producers (Rich Appel, Alec Sulkin, Kara Vallow) and some of your favorite cast members (Mike Henry, Patrick Warburton) from FOX’s hit animated comedy “Family Guy” for a look back at our favorite family memories, plus a special sneak peek featuring all the hilarity and hi-jinx from the upcoming season premiering Sunday, September 30th on FOX!

10:30-11:30 a.m., Hammerstein Ballroom — SYFY WIRE HOSTS THE GREAT DEBATE
What superfan doesn’t love a good debate? Who’s coming back from the Snapture? Reboot or remake? Shared universe or stand-alone? Join celebrity favorites from the sci-fi universe for the ultimate debate as they share their thoughts, feelings and theories on the genre’s most hotly contested topics while our moderator keeps the peace. After each round, you’ll get to settle the debate by casting your vote for the most convincing argument.

Also Read: We Finally Know Exactly When 'Doctor Who' Season 11 Will Premiere

From 20th Century Fox Television in association with Marvel Television, season 2 of “The Gifted” picks up six months after the explosion of the Atlanta Station. The Mutant Underground search for their friends and family who left with The Inner Circle. Having tracked them outside of Washington, D.C., they must contend with new groups with extreme ideologies, both human and mutant alike, to stave off a brewing conflict.

Celebrating the 20th Anniversary of the original series, The CW’s reboot of “Charmed” will host a special premiere episode screening and Q&A with the new cast.

The new season of “Doctor Who” hits BBC America timed to the UK premiere broadcast on Sunday, Oct. 7 at 1:45 p.m. ET/PT. At the same time, fans at New York Comic Con will watch the premiere followed by a panel with star Jodie Whittaker, showrunner Chris Chibnall and executive producer Matt Strevens at the Hulu Theater at Madison Square Garden. Attendees will get to experience the first episode live together and join the Q&A with Whittaker, Chibnall and Strevens.