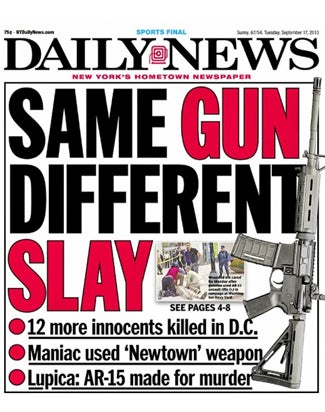 The New York Daily News might want to just call it a day.

The cover of its Tuesday edition (pictured left) focused on the Washington Navy Yard shooting — as did most other newspapers. But NYDN identified the gun used in shooting, which killed 12, as an AR-15. That’s the same weapon used in the Newtown and Aurora mass shootings, a fact that the NYDN’s reporting made much of.

Except that it wasn’t actually the gun used in the Navy Yard shooting, as the FBI said in Tuesday’s press conference, so NYDN had to walk back its entire cover (and associated stories):

NYDN attributed the AR-15 tip to “reputable law enforcement sources,” pointing out that the Associated Press “among many others” made the same mistake.

Hours later, NYDN got an exclusive that Vice President Joe Biden’s niece, Caroline, had been arrested. She wasn’t — just taken into custody, as the paper quickly corrected itself to say, though not before three still-posted tweets proclaimed that she’d been arrested:

And then one that said she wasn’t: