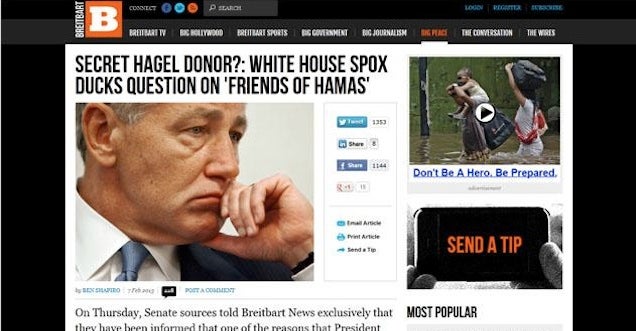 New York Daily News reporter Dan Friedman's said an offhand joke he made about connections between Chuck Hagel and Hamas was taken seriously by conservative news outlets, which then accused the Secretary of Defense nominee of a cover-up.

In an op-ed in the Daily News, the reporter said he called a Republican congressional aide to ask about any controversial groups from which Hagel might have received speaking fees. He made up a couple of fake organizations, he said, as a joke.

"Hagel was in hot water for alleged hostility to Israel," Friedman wrote. "So, I asked my source, had Hagel given a speech to, say, the 'Junior League of Hezbollah, in France'? And: What about 'Friends of Hamas'?"

He then followed up with his source, who didn't respond. But the next day, Feb. 7, Breitbart.com posted the headline: "SECRET HAGEL DONOR?: WHITE HOUSE SPOX DUCKS QUESTION ON ''FRIENDS OF HAMAS.'"

Breitbart.com's report began, "On Thursday, Senate sources told Breitbart News exclusively that they have been informed that one of the reasons that President Barack Obama’s nominee for Secretary of Defense, Chuck Hagel, has not turned over requested documents on his sources of foreign funding is that one of the names listed is a group purportedly called 'Friends of Hamas.'"

The story was then picked up by the conservative National Review and RedState.com. Friedman quickly realized his joking question was the source of the "Friends of Hamas" claim, he said.

Friedman said his source denied sharing the false information with Breitbart News reporter Ben Shapiro, who wrote the story. But the source did acknowledge sharing the joke with others on Capitol Hill, Friedman said.

Shapiro did not immediately respond to requests from TheWrap for comment.

"I am, it seems, the creator of the Friends of Hamas myth," Friedman said. "Doing my job, I erred in counting on confidentiality and the understanding that my example was farcical — and by assuming no one would print an unchecked rumor."