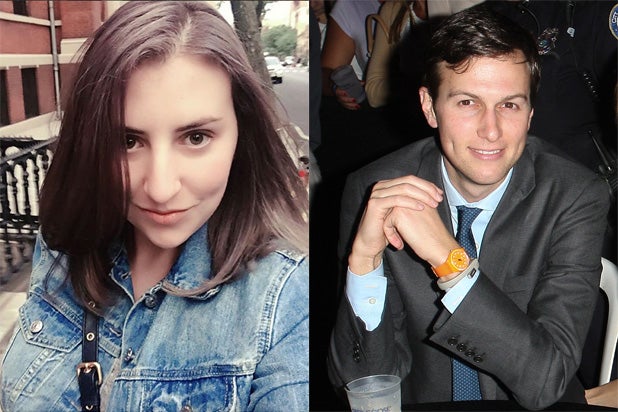 Entertainment writer Dana Schwartz doesn’t plan to leave the New York Observer anytime soon — even as she publicly battles the paper’s owner Jared Kushner over his defense of Donald Trump, who recently tweeted a meme she called “anti-Semitic.”

The tweet featured a photo of Hillary Clinton beside a six-point star emblazoned with the words “Most Corrupt Candidate Ever!” with a background of 100-dollar bills, an image Trump defended at a rally on Wednesday in Cincinnati, where he admitted it wasn’t his idea to delete the tweet.

“You know, they took the star down,” Trump said, referring to his staff. “I said, ‘Too bad. You should’ve left it up.’ I would rather have defended it, just leave it up and say, ‘No, that’s not a Star of David, that’s just a star.'”

“The phrase ‘raving like a lunatic’ verges on idiom at this point, but I feel like it sort of accurately describes Donald Trump’s attempt to double down on the worst possible argument he could have made,” Schwartz said in an interview with TheWrap. “I hope I got under his skin.”

Schwartz published an open letter in the Observer on Tuesday blasting Kushner for supporting Trump in light of the tweet. Kushner, who is Trump’s son-in-law, responded with his own piece the next day, which insisted the presidential candidate is not anti-Semitic and that the tweet was a “careless” move by his team.

“If my father in law’s fast-moving team was careless in choosing an image to retweet, well part of the reason it’s so shocking is that it’s the actual candidate communicating with the American public rather than the armies of handlers who poll-test ordinary candidates’ every move,” Kushner wrote.

Schwartz extended Kushner a backhanded compliment for the explanation.

Though Schwartz doesn’t currently have plans to publish any follow-ups to her original letter, she said the support from her colleagues at the Observer has been “completely positive.” She has not yet been personally contacted by Kushner about her open letter or her employment at the paper.