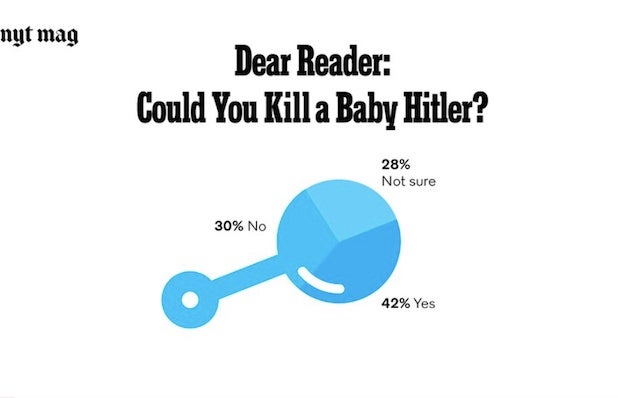 The New York Times Magazine decided to spice things up on a Friday, so it invited readers jaunt back in time and decide whether they would have killed Hitler.

“We asked @nytmag readers: If you could go back and kill Hitler as a baby, would you do it? (What’s your response?)” the Times tweeted.

Also Read: How Hitler Got That Mustache, and What Else We Learned From 'World Wars'

Former Gawker editor-in-chief Max Read slammed the Times, saying silliness like this is a symbol for the demise of print.

the nyt magazine literally keeps an ethicist on retainer and its asking *twitter* about killing baby hitler. no wonder print is dying

Another former Gawker editor turned the tables and asked the GOP frontrunner whether he would’ve done the deed.

Other responses ranged from teasing the Times to proposing different questions altogether.

Was baby Hitler the inventor of peas in guacamole?

I’d throw baby Hitler in front of the bullet that killed Cecil the Lion…. https://t.co/RFyW9jciDQ — Because Jaguars (@Canesjag) October 23, 2015

Maybe you’d grow up to be history’s greatest monster too if 42% of @NYTmag‘s readers were always trying to kill you https://t.co/yZn7RZqE0Z

I ran out to the grocery store for a few minutes and everyone I know is talking about whether they’d kill baby Hitler. Damn, I love Twitter. — Craig Calcaterra (@craigcalcaterra) October 23, 2015

Shouldn’t the question be, would you go back in time and teach baby Hitler better coping mechanisms and maybe get him hooked on Buddhism?

.@nyt asks “would you go back in time & kill Baby Hitler?” What is wrong with them? Question should be “would you kill Baby Mufti.” #Duh!

Given the chance, I would kidnap Baby Hitler and chain him up in the basement like Chunk from “The Goonies.” Baby Hitler? No. BabyRuth. — Brad Willis (@BradWillis) October 23, 2015

@jimgeraghty Just kidnap Baby Hitler and have a Jewish family raise him.

Killing Baby Hitler would be a bad idea. What if, in the new timeline, another person takes his place and is, uh, even more murderous? — Charles Williams (@ChazDoesntCare) October 23, 2015

Currently, just 42 percent of those polled said they would kill the genocidal dictator. Thirty percent said no and 28 percent are unsure.

A spokesperson for the magazine said the poll question is not part of a larger story.

“The magazine publishes the results of a study conducted online in July and August by The New York Times’s research-and-analytics department, reflecting the opinions of 2,987 subscribers who chose to participate,” the spokesperson said. “The feature only runs in print and the magazine usually tweets it out on Friday.”