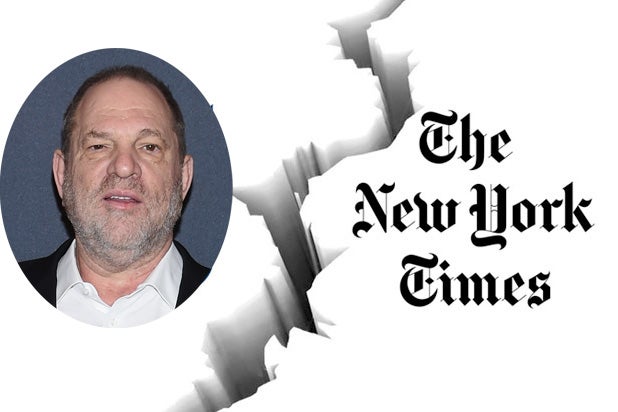 The New York Times on Friday publicly called on Harvey Weinstein to release women from any nondisclosure agreements they might have signed as terms of employment at his companies or as part of settlements of legal cases.

“Mr. Weinstein should publicly waive the NDAs in the women’s agreements so they can tell their stories,” New York Times spokeswoman Danielle Rhoades-Ha told The Wrap. “As a supporter of women, he must support their right to speak openly about these issues of gender and power.”

Rhoades-Ha said, “Mr. Weinstein and his lawyer have confirmed the essential points of the story. They have not pointed to any errors or challenged any facts in our story.”

Important: The @nytimes is calling on Harvey Weinstein to release women from NDAs so they can tell their stories. https://t.co/2cJMilxq2c pic.twitter.com/bH7g7ytSzO

Also Read: Harvey Weinstein in Limbo After Emergency Meeting of Weinstein Company Board

A rep for TWC and for attorney Lisa Bloom, who has been working with Weinstein, have not responded to TheWrap’s requests for comment.

If Weinstein were to agree, it could potentially open to the door to an untold number of additional claims and accusations against the Hollywood titan — as well as damning details of cases that have already been reported.

The media and entertainment world were rocked yesterday when the Times reported that the Hollywood titan has settled at least eight cases of sexual harassment over the last three decades. Among the accusers were Hollywood actresses Ashley Judd and Rose McGowan.

“I came of age in the ’60s and ’70s, when all the rules about behavior and workplaces were different. That was the culture then,” said Weinstein in a statement of apology.

“I have since learned it’s not an excuse, in the office — or out of it. To anyone. I realized some time ago that I needed to be a better person and my interactions with the people I work with have changed. I appreciate the way I’ve behaved with colleagues in the past has caused a lot of pain, and I sincerely apologize for it.”

Weinstein has announced that he will take a leave of absence from the company. His ultimate fate their remains unclear.