The New York Times has officially canceled a pair of pricey trips to Saudi Arabia next month offered to the public as part of the paper’s “journeys” program. In a statement, the Times said the decision was a direct result of ongoing uncertainty surrounding the whereabouts of Washington Post columnist Jamal Khashoggi.

“In light of the uncertainty surrounding the disappearance of the Washington Post’s Jamal Khashoggi at the Saudi consulate in Turkey, The New York Times has decided to cancel all upcoming Times Journeys departures to Saudi Arabia,” a spokesperson told TheWrap Friday morning.

It’s unclear how many people will be affected, but both trips had been sold out.

As late as Thursday evening, the lavish 10-day $12,000 a head excursions, were slated to proceed on schedule, with a rep for Journey’s telling TheWrap that they were “still operating the November departure” and has no plans to alter the itinerary.

A website advertising the trip which had been active Thursday, was taken down as of Friday morning. 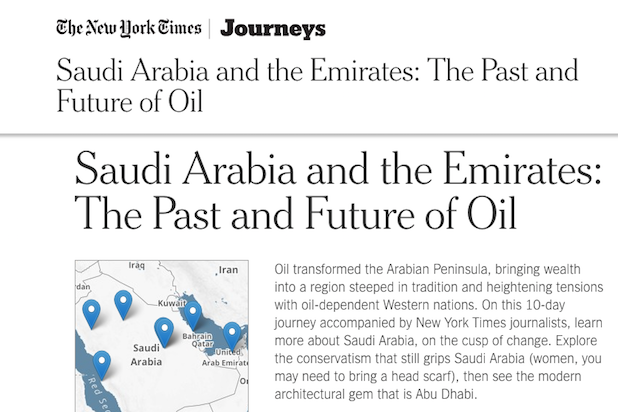 “On this 10-day journey accompanied by New York Times journalists, learn more about Saudi Arabia, on the cusp of change,” read a description on the now removed site. “Hear perspectives from oil industry and government officials and learn how Saudi Arabia keeps its grip on its past even as it tries to embrace its future.”

In addition to meals, lodging in five-star hotels and private tours, the Times also promised participants they would have exclusive access to their own regional experts, including longtime correspondent Clifford Krauss and editorial board member Carol Giacomo.

“The decision was appropriate,” Krauss told TheWrap regarding the cancellation. Giacomo did not immediately respond to a request for comment on her planned participation in the trip.

The decision by the Times follows an earlier move this week to pull out of the kingdom’s “Future Investment Initiative Conference,” amid reports by Turkish officials in the New York Times that the kingdom had Khashoggi murdered at their consulate in Istanbul and dismembered his body with a bone saw. The country has categorically denied the charge.

“I’m terribly distressed by the disappearance of journalist Jamal Khashoggi and reports of his murder,” said business columnist Andrew Ross Sorkin, in advance of his paper’s decision to drop the event “I will no longer be participating in the Future Investment Initiative in Riyadh.”

I’m terribly distressed by the disappearance of journalist Jamal Khashoggi and reports of his murder. I will no longer be participating in the Future Investment Initiative in Riyadh.