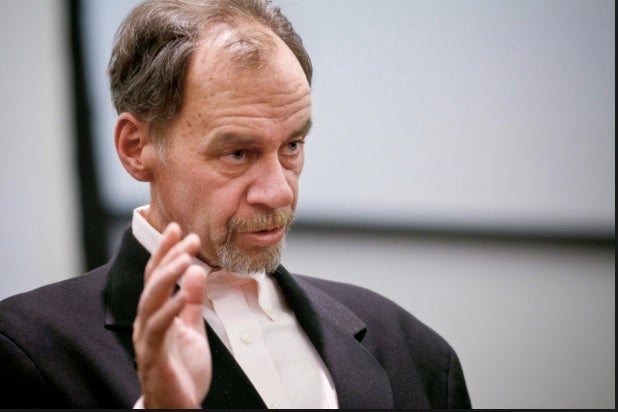 New York Times media reporter David Carr is none too pleased with a conservative blogger who published the home addresses of two Times reporters and told him as much in an interview published Sunday.

Charles Johnson, a conservative blogger who came under fire for publishing what he thought to be the real name of the UVA rape story victim “Jackie,” also published two addresses of Ferguson-based New York Times reporters in retaliation for what he felt was the Times’ unethical journalism in publishing the street address of where officer Darren Wilson lives.

In reality, NYT didn’t publish Wilson’s address — they published a marriage certificate between Wilson and his new wife, which included the address of a law office.

Carr took on Johnson in a New York Times interview:

[Charles] intimated that he had experienced some blowback and that he now felt under threat. “People are trying to kill me and my family members,” he said.

In view of that, I asked him about publishing the home addresses of two Times journalists after erroneously claiming they had reported the address of the Ferguson policeman who shot Mr. Brown. “I didn’t say they published his address,” he said. Yes he did. He said that reporters “published the address of Darren Wilson in The New York Times so here are their addresses.” Moving on, he said that before releasing their personal information, he contacted some friends in law enforcement and told them, “We got to make sure these guys are protected in Chicago and elsewhere, but this is what I’m going to do.” Gee, thanks for that.

The reporters and their families were forced to vacate their homes after facing threats of robbery and rape. I asked what he thought about that.

“It doesn’t feel great, I’ll be honest with you, but I also don’t see it as fundamentally my fault,” he said.

Following Carr’s piece going up, Johnson tweeted it out, with a separate link apparently trying to fundraise:

He then offered a reward for Carr’s mugshot:

I would really want David Carr’s mugshot. Get it for me and I’ll send you $50. He grew up in Minneapolis & has lived in DC & NJ.

To which Carr responded;

Investigative journo @ChuckCJohnson offers $50 for digging up mugshot that was, um, on cover of an NYT bestseller. https://t.co/kITWx1B8w2