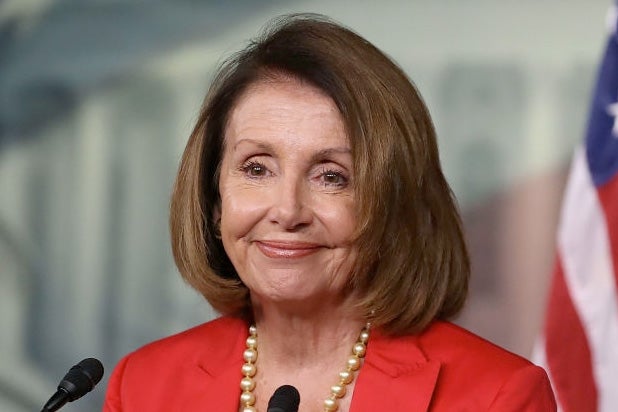 The New York Times published and then swiftly deleted a tweet Thursday which chose to comment prominently on House Speaker Nancy Pelosi’s dress on the day she was elected to serve another term as the country’s third most powerful politician.

“We’ve deleted an earlier tweet to this article that was poorly framed,” the account for New York Times politics said in a terse update.

The original tweet wasn’t up for very long but was captured by the site’s all-knowing “screenshot bot,” which catalogs deleted tweets from prominent Twitter accounts. The bot also showed that the paper tried to delete a second attempt at the story.

“Nancy Pelosi, wearing a hot pink dress, ascended to the marble dais in the center of the House chamber to accept the wooden gavel,” the original tweet read.

A rep for the Times did not immediately respond to request for comment from TheWrap.

In its brief existence, the tweet already ignited passions for its blunt description of Pelosi’s clothing, something critics have charged for years is a byproduct of sexist coverage toward female politicians.

“I sense a ratio brewing,” BuzzFeed’s David Mack said, quote tweeting the offending post. Many others were more explicit.

Issues of sexism remain a sore spot for many after Hillary Clinton’s loss to Donald Trump in the 2016 presidential election. Some, including the former candidate herself, have loudly complained about the unfair coverage they say she received because of her gender. It’s a tightrope that news organizations have often found difficult to traverse, and at least one has already sparked social media ire for the 2020 race.

Earlier this week, Politico ran a story on Sen. Elizabeth Warren’s “likability,” which was broadly condemned by commentators online from both the left and the right who asked whether a male candidate would be subjected to such a metric.

“How dare you @politico?” Joan Walsh, a CNN contributor, said on Twitter Tuesday. “I am not endorsing anyone for a long time but you make me want to get into @ewarren’s corner fast. This is so offensive.”

“Why is @politico starting w/ this? She hasn’t even been on the campaign trail a day and @Politico already has this?” added former Fox News anchor Greta Van Susteren.