Some Los Angeles Times staffers are upset about the front page ad that NBC ran in Thursday’s paper, which had the network’s logo on it, the word “advertisement” and a thick black border, but otherwise was laid out to look like a real newspaper story about the new cop drama “Southland.”

“The NBC ad may have provided some quick cash, but it has caused incalculable damage to this institution,” a petition sent to publisher Eddy Hartenstein reads. “This action violates a 128-year pact with our readers that the front page is reserved for the most meaningful stories of the day. Placing a fake news article on A-1 makes a mockery of our integrity and journalistic standards.” 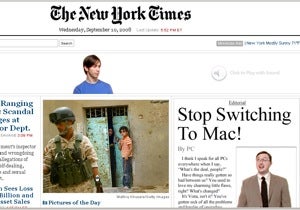 But just six months ago, the New York Times ran on the front page of its web site an ad for Apple that also looked like a “real” New York Times article. It was labeled “Editorial” and titled “Stop Switching to Mac!” By PC. It included a giant photo of John Hodgman, who plays the PC in the famous “Get a Mac” commercials, while Justin Long, who plays Mac, popped his head up over the day’s main news story.

No one at the time got worked up. Meetings were not called to settle down the staff. Is it because the Apple ad ran on the front of the New York Times’ web site, and not on the front page of the paper paper, that it did not come off as a threat to the institution’s journalistic integrity?

The NBC ad in the Los Angeles Times, which pretends to be a reporter’s ride-along with the cops in the show, is not as innovative, but there’s no question that it’s an ad.

The Tribune Co., which owns the Los Angeles Times (my former employer), is in bankruptcy. Circulation trends for the paper are steadily downward. At a time when advertising is desperately needed to save the paper – and a time in which readers have become quite sophisticated about how advertising works, and what makes it different than actual journalism – outrage over a front-page ad that playfully pretends to be a news story is just strange.

Perhaps the problem is best captured in the petition’s invocation of the “128-year pact” with readers. Sadly for the petition signers, the readers they are concerned about are not holding up their end of that pact: buying the paper.