Several reliable, well-informed sources confirmed the idea that Hitler’s anti-Semitism was not so genuine or violent as it sounded, and that he was merely using anti-Semitic propaganda as a bait to catch masses of followers and keep them aroused, enthusiastic, and in line for the time when his organization is perfected and sufficiently powerful to be employed effectively for political purposes.

It was unclear, as of press time, why such an incorrect assessment would have so much immediate resonance today.

The Times has made the article available to subscribers as part of its “Time Machine” feature. It was written by Cyril Brown from Munich, and the paper notes that it was filed “By Wireless.”

Wireless! How ’bout that: Some things never change. 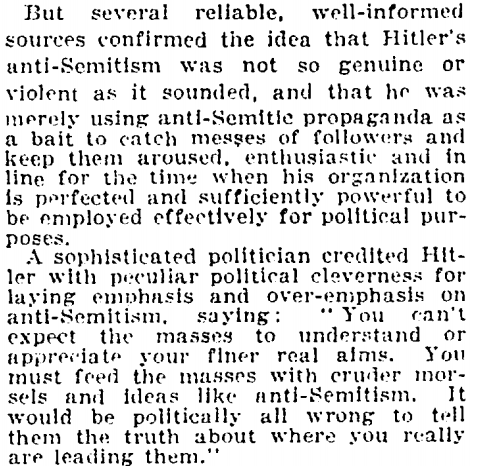