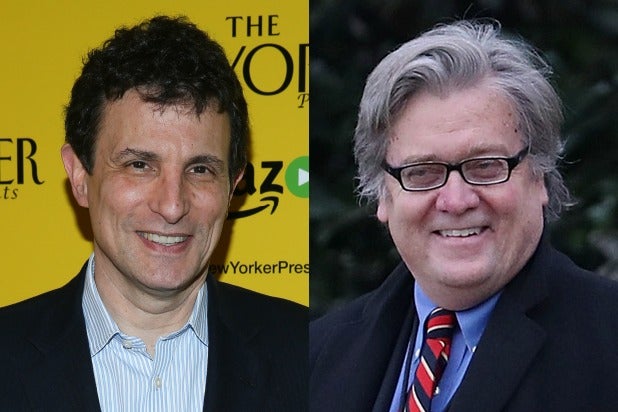 I don’t give a damn about New Yorker editor David Remnick inviting and then disinviting Steve Bannon to the magazine’s Festival of Ideas.

All those words from Remnick… explaining….  triangulating…. finding “a better way” after listening so deeply and in an appropriately heartfelt manner to his staff and readers and other invited guests who thought it outrageous that The New Yorker would give its august platform (and an honorarium!) to an extremist, racist, dangerous thinker? (I use “thinker” generously.)

That the cancellation happened literally within minutes of Judd Apatow then John Mulaney then Jim Carrey then Patton Oswalt and likely every other left-leaning Hollywood personality pulling out of the festival on a lazy Labor Day Monday is probably a coincidence.

So let me translate all those words for you: Remnick was about to have No Festival, so he found a better way. (One veteran of The New Yorker I know likes to describe Remnick’s doctrinaire tendencies as “Stalin — if his speeches were written by Martin Luther King Jr.”)

And then Malcolm Gladwell weighed in.

Huh. Call me old-fashioned. But I would have thought that the point of a festival of ideas was to expose the audience to ideas. If you only invite your friends over, it’s called a dinner party. https://t.co/VwkL4zOrbX

And then Bannon called everybody “gutless.”

On all of this: My care meter is broken.

Don’t any of you notice that none of these things amount to more than a lot of white noise among a chattering class-cum-Greek chorus? How pathetic are we?

As journalists we have so lost the thread of our national narrative that this is where we spend our time. We are so caught up in our own nombriliste despair at the Triumph of Trump that we forget the people most affected by his policies.

Seriously, how much time should I really spend upset over Alan Dershowitz’s status as social pariah on Martha’s Vineyard? Or, alternately, how much effort should be spent laughing at the summer confession of a media whore who milked it night after night on cable news?

Remnick’s logic in inviting Bannon was simple: It would be a provocative — and thus news-making and ticket-selling — get. He was right, but the journalistic fig leaf of the invite didn’t hold.

His staff, his readers and his other booked speakers apparently didn’t think we needed to deeply understand the ideas of Steve Bannon at this point.

Because we don’t. Bannon is on the outs. He’s had his moment, and it was brief and bombastic. Bannon is by now too much even for Trump — the man was fired a dozen White House staffers ago. You don’t give the lunatic fringe the imprimatur of The New Yorker.

And yet: The outrage is all so beautifully stupid because it plays into the Bannonesque/Breitbartian/Fox paradigm that the leftist media won’t entertain voices that it doesn’t already endorse. The chattering class is the thought police.

Day after day, I watch one outrage after another go by, and feel — not paralyzed, but numb. What, as a journalist, does one say (much less do) in the wake of serial assaults on our democracy, on pretty much everything and everyone we took on faith — voting rights, trade partnerships, responsible policing, the integrity of the family unit, the definition of Christian behavior?

But no: My feed is full of dead elephants (thanks, @Yashar) and furious lefties (thanks, Ben Stiller).

I think Bannon got disinvited but I totally was available to fill in when everyone dropped out but would have so quickly said no f-ing way if they had asked, but now it’s all moot, so never mind. https://t.co/Dc1xH8pE0E

And I won’t care.