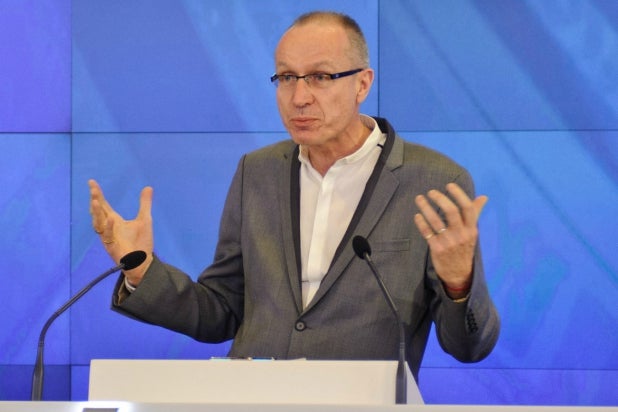 The conglomerate’s third largest division, Digital Real Estate Services, jumped 67 percent on its own line item, thanks mostly to the popularity of realtor.com.

News Corp’s $0.07 per share in earnings bested Yahoo Finance’s analyst consensus of $0.05 on revenue of $2.19 billion. Zack’s estimated EPS coming in at the same level. The media giant missed its sales mark, however.

Factoring in an impairment charge due to essentially giving up on its Amplify Access products, News Corp actually lost $0.65 per share.

News Corp stock (NWSA) was slightly up both during and after the U.S. trading day Wednesday.

Commenting on the actual results, Chief Executive Robert Thomson (pictured above) said: “Thanks to solid performance across a number of our businesses, including the fast-growing realtor.com, we had a strong fourth quarter finish to a good fiscal year. Despite an uneven global economy, very tough currency headwinds and the ongoing transformation of the media landscape, for fiscal 2015 we posted stable revenues, robust EBITDA growth and healthy free cash flow.

“With disciplined internal investments, strategic acquisitions and ongoing product innovation, we have aggressively shifted the company to be more global and more digital. We have clearly emerged as an international leader in digital real estate, opened up new territories at HarperCollins, expanded digital subscriber penetration at our mastheads and successfully integrated our programmatic exchange, creating new digital and mobile advertising opportunities across News Corp.

“We have begun to execute on a capital return program that signifies our confidence in the prospects of the company and the efficacy of its long-term strategy. The year ahead will be an opportunity to build on the sound and profitable platform we have collectively created.”

An investor call is set for 6 p.m. ET on Wednesday.