When it comes to "coompetition" (cooperation + competition) on the internet, I’m all in favor. We compete and we share. We break stories and we aggregate the breaks of others. 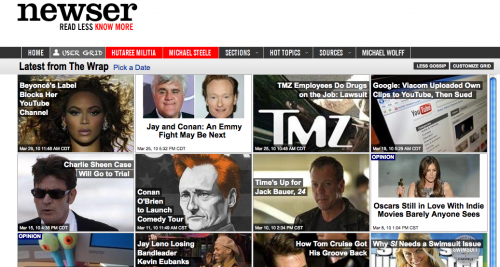 I love news aggregators. They send us lots of new readers. We aggregate news here at TheWrap along with producing a great deal of original content.

But I’m starting to think hard about the line between lifting content and aggregating it.

Exhibit A for me is Newser.com, a site not large enough in my world to chase down previously, but whose lifting practices by supposedly well-respected journalists are brazen enough to merit a harder look and a broader discussion.

In our 14 months of our operation, Newser.com, with an audience of about 3 million unique viewers per month, has sent us precisely 1,600 users. But it has plenty of Wrap content.

I’m coming off a Twitter/email exchange with star columnist Michael Wolff, editor Caroline Miller and CEO Patrick Spain after Newser picked up a Wrap story about Beyoncé (see our story here) this week, rewrote it with their byline, gave us no attribution or credit in the story, but included a small link to TheWrap to the right of the story.

They went from denial (Wolff), to apologetic concern (Miller) to rank dismissal (Spain), in that order.

On closer scrutiny, I found that it was worse than I thought. Although Miller said that Newser practice is to put credit and an embedded link to the story’s originator (an editing omission, she said, with the Beyoncé piece). I easily found instances where they did no such thing ("Fox, Howard Stern Talking Idol," "DirecTV Boss to Be Murdoch’s New Vice-Chair") and others where they cited TheWrap but "forgot" to link: ("American Idol Snags DeGeneres as 4th Judge," "Obama Visits Dave Monday").

Here’s one where they just lifted the entire article, a timeline about Tom Cruise.

Then I discovered the “source grid” page, where I found an entire page of beautifully-presented Wrap content, without a single link to us. (See photo.)

Instead, the grid linked to Newser rewrites of Wrap stories. One click gets you to the “Wrap” page, another click gets you to the summary, then a third click to the one Wrap link — but no, not yet, first they served you AN AD! Fourclicks to get to TheWrap.com, whose content it is, if you close out the ad and can wait that long.

I wonder how many ads they’ve served to people actually trying to go to TheWrap.

By comparison, one Drudge link can commonly send a site 50,000 users. (Thanks, Matt.)

In her email, Miller insisted Newser’s goal is to “generate bounce.” She wrote: “The intention is that everyone should benefit.” But clearly we don’t. Only they do.

She promised to look into the source grid.

But that lasted less than a day.

When our COO Kevin Davis wrote to ask that our stories be properly linked and attributed in each article, including on the source grid page, the response came back swiftly from Patrick Spain, the CEO: Forget it.

“None of the other 1,700 or so sources we use have taken issue with our practices which are entirely about curating the vast quantity of news on the Web for the benefit of readers. We are not free-riders and we would consider it libelous for you to make that claim outside correspondence intended to settle a minor difference of opinion.”

Seriously? Nobody else, ever?

Outside of the legal points, there’s right and wrong. There are ethics, or should be.

On the internet I’ve found that most of us play nice in the sandbox. Most of us follow common guidelines and best practices for fair use.

For the most part, it works out; aggregators are important friends to original content sites such as TheWrap.

Take the Huffington Post. The site is often accused of rewriting other people’s hard-won news, with a pithy headline, a sexy photo. True — HuffPo has largely built a business on it.

But the Huffington Post also makes a serious effort to return the favor to those sites from which they rewrite content. HuffPo sends TheWrap lots of traffic; occasionally it gives us direct links. Speaking as one niche site, it works for us.

Newser is in another category altogether. Michael Wolff, a darling of the Manhattan salon set, knows better. Caroline Miller, a veteran editor, should know better.

The CEO of Newser knows well enough and has decided he does not care.

This should not be acceptable behavior in a world in which we are trying to build the new models for journalism.

We’re talking about survival here. And this behavior isn’t fit, much less the fittest.