Newsmax anchor Grant Stinchfield’s irritation with President Biden looks to be in full bloom, after the commander-in-chief took a moment to pick a dandelion for First Lady Jill Biden before boarding Marine One on Thursday.

The picture went viral on Twitter soon after, with many users (and news outlets) viewing it as a heartwarming gesture. Stinchfield wasn’t one of them, though, and he even went as far as to suggest the dandelion was “planted” while on air.

“He picks up the weed and gives it to Jill in what I guess is supposed to be some kind of a sweet gesture,” Stinchfield said. “I say it was a planted dandelion there. Who knows?” 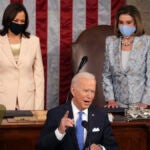 He’s not a huge fan of dandelions, either. Stinchfield said, “You blow it, it goes everywhere and then everybody starts sneezing.” Perhaps he’s more of a sunflower or roses kind of guy.

Newsmax and Stinchfield may not have loved it, but other outlets weren’t as critical. NowThis tweeted it was a “sweet gesture,” complete with an accompanying smiley emoji. Reuters tweeted Biden was “ever the romantic” for it, and Washington Post reporter Matt Viser complimented his colleague Demetrius Freeman for snapping pictures, tweeting “quite the captures.”

You can judge President Biden’s dandelion-picking ability for yourself below, via C-SPAN: