NewsNation will broadcast three of the most high profile election race debates this fall – the race for Texas Governor, and the Senate races in Pennsylvania and Georgia.

On Oct. 14, NewsNation heads to Savannah, Georgia for the debate between Democratic Senator Raphael Warnock and Republican challenger Herschel Walker. That debate will air 7-8 p.m. ET. 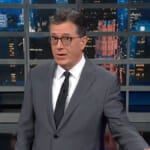 Also Read:
Colbert on Fetterman’s Double-Digit Lead Over Dr. Oz: ‘Pennsylvanians Want To Have a Senator Who Is Actually From Pennsylvania’ (Video)

Democratic Lieutenant Governor John Fetterman and Republican challenger, Dr. Mehmet Oz, will face off in their Pennsylvania debate on Oct. 25 from 8-9 p.m. ET.

All of the debates will air on NewsNation nationally and Nexstar local television stations in the respective markets will carry the debate locally.

All three of the debates will be paired with “Debate Night in America,” featuring pre and post-debate analysis and news. George Willand and Chris Stirewalt are some of the NewsNation talent scheduled for those companion shows.