Newsroom job cuts have reached a record high for the first half of 2020, growing by about 170% in comparison to layoffs from last year, according to a report from global outplacement firm Challenger, Gray & Christmas.

The firm surveyed 150 HR executives across the industry in June and found that there have been at least 11,027 reported job cuts through June. Last year, there were a reported 4,087 job cuts in that same timeframe and 5,389 across the year, while 2018 had 5,104 cuts through June and 11,878 for the entire year. 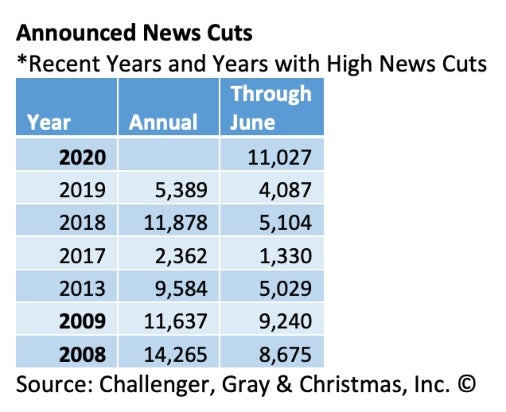 Many of these layoffs — which have hit companies and news organizations like Vox Media, Vice Media, the New York Post, The Atlantic and Fortune magazine — are largely the result of the economic downturn caused by the COVID-19 pandemic as advertising has taken a hit with the cancellations of events and the closures of businesses.

Still, some companies have been able to avoid layoffs by instituting pay cuts or furloughing staffers. Of the 30% of companies who responded to the Challenger survey and said they instituted pay cuts, 56% said they were able to avoid layoffs. Twenty-five percent of respondents also said that they initially furloughed workers but have been able to “recall some or all of them.” But for 20% of respondents, job cuts that did happen were permanent.

“The importance of reporters and newsrooms that hold themselves to a high journalistic standard cannot be understated, especially during a global pandemic and a divisive election year,” Andrew Challenger, the senior vice president of Challenger, Gray & Christmas, Inc., said in a statement. “Taking dedicated journalists off their beats, even temporarily, ultimately hurts the general public. However, many companies, not just newsrooms, are opting for other cost-saving measures to avoid layoffs, such as pay cuts, and finding them preferable to losing valuable staff.”